On Saturday the 12th of October I once more headed back to the Broadway cinema in Nottingham for Day 3 of the Mayhem Festival, for yet another mixed bag of films. 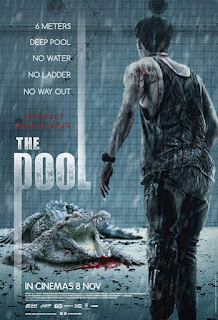 Kicking Saturday’s viewings off was the Thai Killer Croc film THE POOL. In which an unfortunate member of a film crew, who is sent to finish tidying up the set at a disused swimming pool, has a slight mishap and becomes trapped inside one of the disused pools.

With 6 meter high walls, and no way of climbing back out, he soon finds his problems are only just beginning, when an escaped Crocodile falls into the empty pool with him and he is forced to fight off repeated attacks by the croc.

A film which proves not only that if something can go wrong, it will. But also, just when you think things couldn’t possibly get any worse, they invariably will.

This was great fun and a huge hit with the crowd, which had everything you would expect from a killer Croc film and an ending that was just oh, so wrong.. 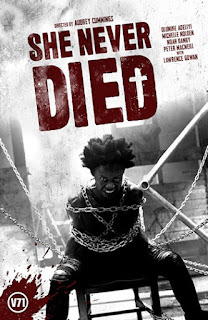 The second film of the day, SHE NEVER DIED by director Audrey Cummings (Tormented) was, for me, the film I was most intrigued to see. Being a sequel of sorts to the 2015 film “He Never Died” which starred Henry Rollins.

Continuing the theme from that film, we’re introduced to socially awkward loner, Lacey (Olunike Adeliyi – TV’s American Gods), who is living rough on the streets. But we soon realise she’s no ordinary homeless person, as low-life criminals that cross her path quickly come to an untimely demise.

But when she crosses paths with a gang of human traffickers, who like making their own internet snuff videos, matters quickly begin to escalate between her and the gang in a series of bloody confrontations.

Written by Jason Krawczyk, who wrote and directed the original, this was my favourite film of the festival so far and proved a huge hit with other festival goers. As Lacey goes around killing bad guys Terminator style, who are looking to feature her in their next web-video.

If you loved the original, you'll love this. But you'll be pleased to know you don't actually need to see the previous movie to know what's going on. There's also a very interesting set up for a potential third film, which I eagerly look forward to. 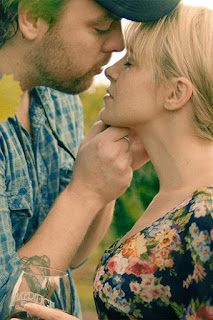 Next up was one of the more bizarre films of the festival, SOMETHING ELSE (AKA After Midnight). Being part domestic drama, about a guy dealing with the fact his relationship is on the rocks. And Part monster movie, as he repeatedly finds himself having to defend his home each night with his shotgun, against some sort of unseen monster, that keeps trying to break in.

A bit of a slow burner, this was a very bizarre film, that constantly flips between this couple trying to sort out their domestic troubles one day, then him having to fight off this unseen beast at night the next.

The film was written and co-directed by Jeremy Gardner, who also pays the lead role and who also wrote and directed the 2012 zombie film The Battery, which he worked on with co-director Christian Stella. That one was also a bit of a slowie and explored similar themes about relationships against a backdrop of people fighting for their lives.

The film was however a crowd pleaser and the ending was certainly one of the biggest WTF moments I’ve ever experienced in a cinema.

The Mayhem short films showcase was up next, featuring a mixed bag of short films from around the world, which I will be reviewing separately shortly. After which it was onto the penultimate film of the evening.

THE GANGSTER THE COP THE DEVIL 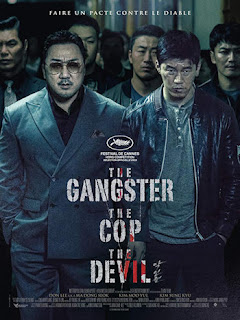 The fourth feature length film of the day, the Korean action/crime/thriller THE GANGSTER THE COP THE DEVIL, provided a radical change of pace from the bizarre tongue-in-cheek nature of the previous films.

A group of cops are trying to track down a serial killer, who has been targeting people at random with no apparent motive. But when the killer inadvertently tries to kill a mafia boss (Dong-seok Ma – Train to Busan), the stakes get a whole lot higher.

Having barely survived the stabbing, he orders his men to track the guy down before the cops get him. Whereas the cops are desperately trying to get this guy, so they can close their case files on all these murder, before the gangsters chop him up. All while the killer continues to taunt them both.

A brilliantly violent thriller, in which dodgy criminals and gung-ho cops try to outwit each other. This one was another hit with the crowd and was another one of my favourite films of the evening (which is more than can be said for the next film).

Here I must confess, I refused to stick around for the final film of the evening. Which was the 1988 “comedy” horror Vampires Kiss, starring Nicholas Cage. As you are no doubt aware, I detest Nicholas Cage with a vengeance and steadfastly refuse to watch any of his movies where possible.

So having already been subjected to one film of his this weekend, decided to give this one a miss and head back to the hotel.

But for those wondering what its about (according to the IMDB), its about a stockbroker (Cage) who thinks he’s turning into a vampire after being given a lovebite by some girl, and is essentially just 90mins of him hamming it up.

My friends that stayed behind to watch it did apparently find it funny, but not for the right reasons. The trailer tells you pretty much all you need to know.

And thus concluded Day 3 of the Mayhem Film Festival


The Mayhem Festival is on between 10-13 October at the Broadway Cinema, Nottingham.
For more info visit http://www.mayhemfilmfestival.co.uk
Also visit the official Mayhem Facebook and Twitter pages.
Posted by Dark Angel at 08:24