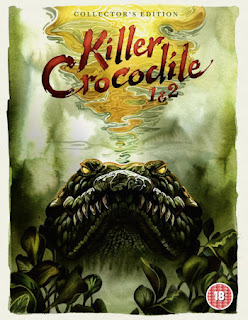 From the notorious Fabrizio De Angelis (Zombie Flesh Eaters) comes the ultimate in nature amok films. When a group of well-meaning scientists venture into the murky swamps of Santo Domingo, little do they know they are stumbling into a toxic nightmare. Local industrial barons have foolishly been pumping their waste into the water and this has given birth to a humongous reptilian monstrosity with an equally large appetite for human flesh.

Featuring effects by the legendary Giannetto De Rossi (Rambo III), Killer Crocodile delivers all the thrills, spills and chills that any self-respecting fan of eco-horror demands. With performances from Anthony Crenna (son of Rambo’s Richard Creena) and Hollywood legend, Van Johnson (Eagles Over London), Killer Crocodile remains a firm cult favorite… find out why for yourself, with striking HD clarity, thanks to this 2k restoration from 88 Films.

Getting back in the water will never be safe again! From special effects guru, Giannetto De Rossi (Dune), comes this blood-soaked follow-up to Killer Crocodile. The swamps of Santo Domingo are still haunted by the waste of the industrial industry and Anthony Crenna (The Blob) is out to prove the dangers plaguing the local water sources with the help of reporter, and love-interest, Liza (Debra Karr). At the same time a greedy property developer pushes to secure a location for his pet project, a swank new holiday resort overlooking a toxic river, despite the areas problem with a mutated killer crocodile chowing down on anyone dumb enough to enter the water.

Stepping behind the camera for his first and, to date, only time, BAFTA-nominee Giannetto De Rossi (The Last Emperor) amps up the gore, set-pieces, F-bombs and general nastiness; the scene in which a boatload of orphans and a nun get chewed on by the killer croc is enough to cement this film’s place in the exploitation history books, but that’s just the beginning and Killer Crocodile 2 is bigger, badder and louder than the first in every conceivable way. Brace yourself for Killer Crocodile 2 like you have never seen it before thanks to this beautiful 2k restoration from 88 Films.