THE WALKING DEAD : WORLD BEYOND Series 1 - arriving on Disc and Digital October 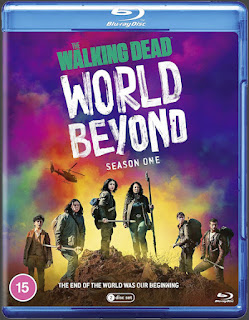 Cultural phenomenon The Walking Dead expands its scope with a next-generation spin-off World Beyond, a new series exploring the lives of four teenagers raised in a post-apocalyptic world. The Walking Dead: World Beyond arrives on Blu-ray, DVD and digital 11 October 2021, courtesy of Acorn Media International.

Leaving the safety and comfort of home to brave dangers, known and unknown, living and undead on an important quest, the teens are pursued by both those who wish to protect them and those who wish to harm them including Elizabeth Kublek (Julia Ormond – The Curious Case of Benjamin Button, My Week with Marilyn). A coming-of-age story unfurls across dangerous terrain, challenging everything they know about the world, themselves and each other. Some will become heroes. Some will become villains. But will they find the truths they seek in the World Beyond?