Arrow Video’s November films include a definitive edition of a 70s American horror classic, an 80s cult horror absolutely loaded with extras, an influential Italian chiller, and a UHD edition of a Japanese nerve-shredder.

The releases will come in Arrow Video’s superb packaging, with new artwork, 4K restorations so the films fresh and fabulous, brand new commentaries and featurettes, never-before-seen alternative cuts of the films, as well as fold-out, double-sided posters, art cards, and illustrated booklets. 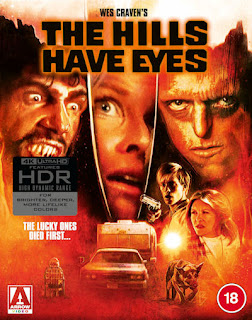 Horror master Wes Craven achieved critical and commercial success with the likes of Scream and A Nightmare on Elm Street – but for many genre fans, the director’s seminal 1977 effort The Hills Have Eyes remains his masterpiece.

Taking an ill-advised detour en route to California, the Carter family soon run into trouble when their campervan breaks down in the middle of the desert. Stranded, the family find themselves at the mercy of a group of monstrous cannibals lurking in the surrounding hills. With their lives under threat, the Carters have no choice but to fight back by any means necessary.

Following on from his notorious 1972 directorial debut The Last House on the Left, Craven’s The Hills Have Eyes stands alongside the likes of The Texas Chain Saw Massacre and Night of the Living Dead as one of the defining classics of American horror.

Pre-order the UHD from Amazon.co.uk A perky high-schooler takes on the mob in Sailor Suit and Machine Gun, a one-of-a-kind genre-bender that riffs on the yakuza film, coming-of-age drama and ‘idol movie’, inventively adapted from Jiro Akagawa's popular novel by director Shinji Somai (Typhoon Club, Wait and See), a massively influential figure in Japanese cinema whose work has been little seen outside his homeland.

Hoshi Izumi is a young innocent forced to grow up quickly when her father dies and she finds herself next in line as the boss of a moribund yakuza clan. Wrenched from the security of her classroom and thrust into the heart of the criminal underworld, she must come to terms with the fact that her actions hold the key to the life or death of the men under her command as they come under fire from rival gangs.

Presented in both its Original Theatrical and longer Complete versions, and the first time one of Somai's films has been released on home video in the West, this landmark work from his early career was responsible for launching teen talent Hiroko Yakushimaru (Legend of the Eight Samurai; Detective Story) as the iconic face of a generation, with the catchy theme song she performs indelibly etched into the zeitgeist of early-1980s Japan.

FIRST PRESSING ONLY: Illustrated collector's booklet featuring new writing on the film by Aaron Gerow and Alex Zahlten, and a discussion between the film's star Hiroko Yakushimaru and the acclaimed director Kiyoshi Kurosawa, who was an assistant on Sailor Suit and Machine Gun. 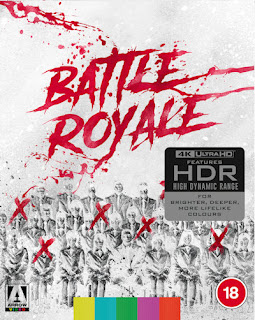 The kids of Third Year Class-B Shiroiwa Junior High School are back, in a 4K restoration of the classic cult shocker adapted from the controversial novel by Koushun Takami.

Dispatched to a remote island, they are each given individual weapons (ranging from Uzis and machetes to pan lids and binoculars), food and water, and the order to go out and kill each other. Every player is fitted with an explosive collar around their neck, imposing a strict three-day time limit on the deadly games in which there can only be one survivor. Overseeing the carnage is ‘Beat’ Takeshi Kitano (Sonatine, Hana-bi, Zatoichi) as the teacher pushed to the edge by his unruly charges.

Playing like a turbo-charged hybrid of Lord of the Flies and The Most Dangerous Game, the final completed work by veteran yakuza-film director Kinji Fukasaku (Battles without Honor and Humanity, Graveyard of Honor) helped launch a new wave of appreciation for Asian cinema in the 21st century.

• Audio commentary by critics Tom Mes and Jasper Sharp
• Coming of Age: Battle Royale at 20, a 42-minute documentary about the legacy of Battle Royale
• Bloody Education: Kenta Fukasaku on Battle Royale, an interview with the film’s producer and screenwriter
• The Making of Battle Royale: The Experience of 42 High School Students, documentary featuring footage from the shooting of the film and cast and crew discussions
• The Slaughter of 42 High School Students, a look behind the scenes of the shoot
• Behind the scenes footage with comments from the cast and crew
• Filming on Set, a look at the shooting of key scenes from the film
• Conducting Battle Royale with the Warsaw National Philharmonic, archive footage of Masamichi Amano conducting the soundtrack rehearsal

Pre-order the UHD from Amazon.co.uk 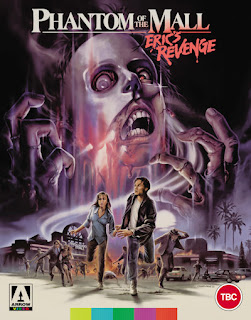 With numerous interpretations of Gaston Leroux’s classic novel The Phantom of the Opera having been turned out over the years, it was only a matter of time before the slasher genre decided to take a stab at the tale – step forward 1989’s Phantom of the Mall: Eric’s Revenge!

High school sweethearts Eric Matthews and Melody Austin are so in love, but their youthful romance is cut tragically short when Eric apparently dies in a fire that engulfs his family home. One year later and Melody is trying to move on with her life, taking up a job at the newly built Midwood Mall along with her friends.

But the mall, which stands on the very site of Eric’s former home, has an uninvited guest – a shadowy, scarred figure which haunts its airducts and subterranean passageways, hellbent on exacting vengeance on the mall’s crooked developers.

DISC ONE – THE THEATRICAL CUT (BLU-RAY)

• Brand new 2K restoration of the TV Cut with Standard Definition inserts for the footage unique to this version (89 mins)
• Integral Fan Cut combining footage from both the Original Theatrical and TV Cuts for the ultimate Phantom of the Mall experience! (96 mins)

MILL OF THE STONE WOMAN - On Limited Edition BD 29 Nov 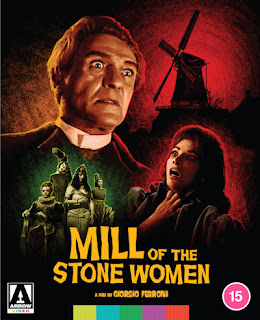 Before Black Sabbath, before I Vampiri, director Giorgio Ferroni (The Lion of Thebes, Blood for a Silver Dollar) introduced audiences to period horror Italian-style with his chilling 1960 shocker Mill of the Stone Women – a classic tale of terror redolent with the atmosphere of vintage Hammer Horror.

Young art student Hans von Arnam (Pierre Brice, Night of the Damned) arrives by barge at an old mill to write a monograph about its celebrated sculptures of women in the throes of death and torture, maintained and curated by the mill’s owner, the hermetic Professor Wahl (Herbert Böhme, Secret of the Red Orchid).

But when Hans encounters the professor’s beautiful and mysterious daughter Elfi (Scilla Gabel, Modesty Blaise), his own fate becomes inexorably bound up with hers, and with the shocking secret that lies at the heart of the so-called Mill of the Stone Women.

The first Italian horror film to be shot in color, Mill of the Stone Women prefigured a raft of other spaghetti nightmares, including the work of maestros Mario Bava and Dario Argento. Arrow Video is proud to present this brand-new restoration of one of the foundational titles of Italian horror.

• Restored original lossless mono Italian and English soundtracks
• Newly translated English subtitles for the Italian soundtrack
• Optional English subtitles for the deaf and hard of hearing for the English soundtrack
• New audio commentary by Tim Lucas, author of Mario Bava: All the Colors of the Dark
• Mill of the Stone Women & The Gothic Body, a new visual essay on the trope of the wax/statue woman in Gothic horror by author and critic Kat Ellinger
• Turned to Stone, a newly edited featurette containing archival interviews with actress Liana Orfei and film historian Fabio Melelli
• A Little Chat with Dr. Mabuse, an archival interview with actor Wolfgang Preiss
• Rare opening titles from the UK release, re-titled “Drops of Blood”
• German opening titles
• US and German theatrical trailers
• Image galleries

DISC 2 – THE FRENCH AND US VERSIONS (LIMITED EDITION EXCLUSIVE)