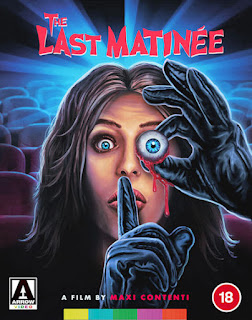 A trip to the movies takes a deadly turn in this stylish neo-giallo love letter to classic slashers that will send your popcorn flying and have you diving behind your seat!

A cold, wet day. A declining cinema. All you want is to get out of the rain and watch a good film. But who else is in there, hiding in the dark?

When Ana takes over projection duties from her ailing father, she doesn’t expect anything worse than a broken reel or a burned-out bulb.

But there’s a sadistic killer in the auditorium, and soon blood is running in the aisles as he starts picking off the audience members one by one.

Can Ana and the few remaining survivors escape the murderous madman, or will they be victims of his matinee massacre?

Uruguayan director Maxi Contenti marks himself out as a talent to watch with a film that Rue Morgue calls “Visually stunning… indulgently violent!” Arrow Video is proud to present The Last Matinee. It’s a killer time at the movies! 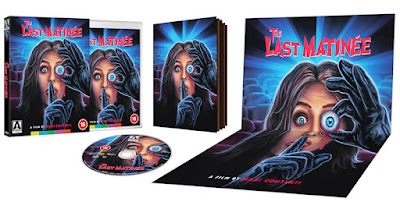 THE LAST MATINEE is released 6th December from Arrow Video.