Next on the Hex Arcana agenda; revive the pulp horror paperback. Their first offering in the collection is a new edition of Sarban's classic alt-history horror 'The Sound of His Horn'. First published in 1952, the much-loved novel imagines a nightmare world where the Nazis won the war, and people are hunted for sport.

The retro edition is inspired by the cult horror paperbacks of the 70s and 80s, and features an original, hand-painted cover by legendary artist of the era, Lisa Falkenstern. Acclaimed horror critic and scholar Kim Newman provides an insightful new foreword to the volume.

According to Editorial Director Sarah Daly, “We're honoured and excited to present a brand new edition of this genre gem as the first volume in our collectable paperback range. With Hex Arcana, we want to reignite the lurid spark of magic that made the pulp horror novels of the past so enticing to read and to own.”

Co-founder Lawrie Brewster added, “At Hex, we're passionate about physical media, about creating tangible objects for horror fans to treasure. We want to help lead the movement for original, painted covers that evoke feeling when you see them on a shelf, or hold them in your hand..

'The Sound of His Horn' is available to buy now exclusively on Kickstarter. The funds raised through sales of the book will help to fund the fledgling publisher.

Purchase 'The Sound of His Horn' through the Kickstarter Campaign 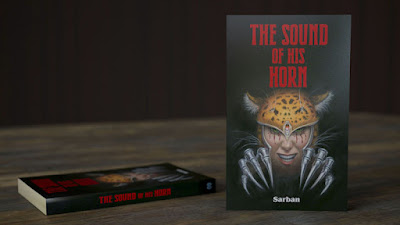