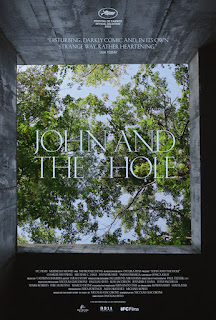 From debut filmmaker and artist Pascual Sisto and Academy Award-winning writer Nicolás Giacobone (Oscar winner for his script for 2014’s Birdman), comes a dark fable - imagine Home Alone reworked by Michael Haneke - that dwells in the shadows of adolescent angst and imagination, JOHN AND THE HOLE follows an affluent family that suffers a rude awakening at the hands of the film’s protagonist. With its unique and chilling premise, you’ll be desperate to find out how it ends.

Synopsis: 13 year-old John decides to hold his affluent family captive in an underground bunker behind their house. Left without supervision, John experiences newfound independence, exploring the difficult passage from childhood freedom to adult responsibility in this chilling psychological horror-thriller.

Recalling recent indie psychological horrors A Hole In The Ground, I Am Not A Serial Killer, and Goodnight Mommy, this brilliantly astute and assured debut echoes the work of director Yorgos Lanthimos, but with an eerie, detached style all of its own.

The film co-stars top-rank genre actors Michael C. Hall (Dexter), Jennifer Ehle (Saint Maud), and Taissa Farmiga (American Horror Story), and features a breakout performance by Charlie Shotwell in an enigmatic meditation on what it means to grow up.

JOHN AND THE HOLE will be released in UK and Irish cinemas, and on Digital, 8th October.