On Saturday the 9th July I attended HorrorconUK in Rotherham. Held at the Magna Science Centre, just outside of Sheffield. This weekend long event, which is now in its second year, saw this Museum, based in a former Steel Foundry, transformed into a kind of shrine for all things horror related.

Bringing all the different facets of the horror genre together under one roof, there were several rooms filled with stalls selling every kind of horror themed merchandise you could imagine. From DVDs, Blu-Rays  and even old VHS tapes, to movie memorabilia, novels, comic books, artwork and much more besides.

The event was sponsored by Horrify Me, who were in attendance showcasing their horror themed portrait photography (you can see their awesome work at www.horrifyme.co.uk). However, the main attractions were the special guests who were there doing autograph signings. These included… 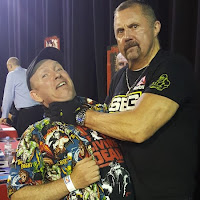 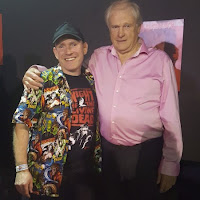 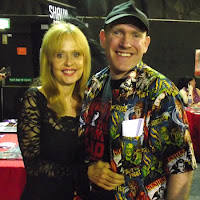 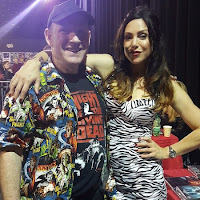 Also in attendance were horror author Shaun Hutson (Slugs), Gothic model turned horror director and actress Emma Dark (Seize the Night), horror actor Dean Sills (Cleaver : Rise of the Killer Clown) who was promoting his new short “The Railway Carriage”. Artist Tom Hodge, the man behind The Dude Designs, who was showcasing, and of course selling, the many horror film posters he’s designed (for those unfamiliar, he did the artwork for “Hobo with a Shotgun” and “Wolfcop”) and there were many other artists and authors besides including the guys behind the Esmee the Vampire comic book series, which included Esmee herself, AKA Gothic Model Velvet Noxx. (apologies to those I didn’t mention). 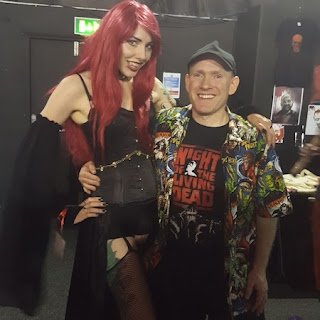 The event was extremely popular, so much so that the venues car park was overflowing well before its advertised 11am start time (all the more reason to buy an early bird ticket I suppose) and the autograph queues to some of the guests were quite horrendous. Which was partly due to the awkward way they’d been arranged, though they did manage to restructure the queuing system after lunch, which made things flow a little easier.

A lot of people turned up in costume and there was a contest for the best ones presented by TV Horror Host Bunny Galore (who's one hell of a character, believe me), who for those unfamiliar with him, presents offbeat horror movies late at night on the Showcase TV channel. 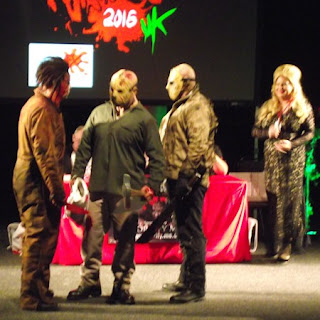 Other attractions included a zombie shooting range, where you could try and hit targets with a crossbow or even knives or throwing axes. There were also SFX demonstrations, body painting, screenings of short films and several of the main guests also did special audience Q&A sessions.

Overall, a really fun day. But if its autographs you’re after, be prepared to queue. Next year, I’ll probably do both days, so I can spend one day getting autographs and another looking round at my leisure.

For more info on this and future events visit http://www.horrorconventions.co.uk/

Here's a video of some of the fun on the day...