THE DEAD NEXT DOOR 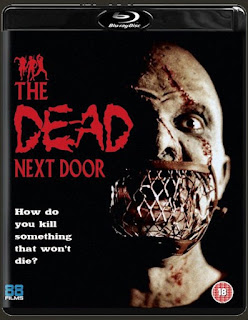 The zombie apocalypse has arrived, and only a ragtag group of mid-western misfits, heavily armed and ready for a fight to the death, can save humankind from a horde of flesh-hungry ghouls!

Made by underground movie legend J.R. Bookwalter, and widely seen as one of the most revolutionary low budget shockers of the decade, 1989's THE DEAD NEXT DOOR ushered in a new generation of 'do it yourself' filmmaking and comes from the same era of home-made gore as Peter Jackson's BAD TASTE and Jörg Buttgereit's NEKROMANTIK.

Featuring voice dubbing from Bruce Campbell (THE EVIL DEAD series), a supporting role for splatter movie legend Scott Spiegel (INTRUDER) and with "financial backer Sam Raimi credited as Master Cylinder" (The New York Times), THE DEAD NEXT DOOR remains one of the greatest ghoul-shows to ever command a cult following! 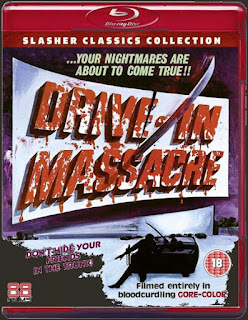 A year before the slasher boom really hit its stride with John Carpenter's legendary trendsetter HALLOWEEN, there was DRIVE-IN MASSACRE - an early slice and dice protoype that is finally achieving its rightful reappraisal courtesy of a brand new 2k scan from the splatter movie addicts at 88 Films!

This worldwide HD debut indicates that DRIVE-IN MASSACRE was, in many ways, ahead of its time - spinning a sleazy story about a clueless police investigation into a madman who is carving up spectators at outdoor cinemas across California!

Introducing the sort of giallo framework that the post-FRIDAY THE 13th teenkill genre would later take as its own, DRIVE-IN MASSACRE was directed with the expert grindhouse touch of Stu Segall, the man who oversaw Marilyn Chambers in INSATIABLE (1980) before producing such hit TV series as RENEGADE. A lively and lacerating bout of lunatic slasher energy.

Buy the UK BD of DEAD NEXT DOOR from Amazon.co.uk

Buy the UK BD of DRIVE IN MASSACRE from Amazon.co.uk

Buy the UK DVD of DRIVE IN MASSACRE from Amazon.co.uk