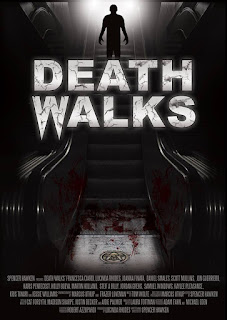 Friday the 15th of July I attended the premiere of zombie film DEATH WALKS in Romford, Greater London (a hell of a way to spend your birthday)! For those of you who follow this site and my social media pages, you’ll know that I was a zombie extra in this and have made a couple of behind-the-scenes features about my time on set for my YouTube channel, so to see the finished result on screen was a very surreal experience for me.

The film takes place in early November, and whilst the people in Romford are enjoying the November 5th fireworks, its just another night at the local mall for the security guards and cleaners who are working late. With the shops closing and the staff slowly making their way out, the only thing left to do is rounding up the last few stragglers and locking up for the night.

But when one of the guards catches a strange woman (played by Cannibal Holocaust's Francesca Ciardi) scrawling satanic symbols on the floor near one of the entrances, it marks the start of a series of very bizarre events. Shortly after, another guard finds a girl by the main entrance who appears injured and matches the description of a girl that recently disappeared (TV actress Jessie Williams). But no sooner does he bring her inside to help her, she promptly disappears and hoards of mysterious people with strange facial lesions suddenly appear in the mall. 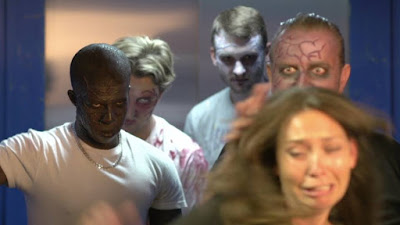 With these people popping up all over the building, then disappearing again, staff going missing and bodies apparently piling up, the remaining workers find themselves battling to find a way out past these apparent “zombies”. But despite insisting that zombies aren’t real, whatever these people are, the group are in very real danger and no matter how many zombie films they’ve seen will prepare them for this…

Filmed in the town's Mercury Mall (the premiere was actually held at the mall's cinema, which also features in the film), Director Spencer Hawken, who makes his directorial debut with this, originally intended Death Walks as a short film, which started life as a community project, relying on people donating their time, services and even the filming locations for free. But was quickly expanded into a full length feature after being overwhelmed by the amount of help and support he received, which included the involvement of Lucinda Rhodes (TVs Dream Team, Dead Cert, Fall of the Essex Boys) who helped to produce.

Now, bearing in mind that this is the director’s first film, it was shot for no money and most of the supporting cast hadn’t acted in a film before. I was extremely surprised at just how good this turned out and I’m not just saying that because I’m friends with the director (which I must disclose in the interests of transparency).

To be fair, the film does of course suffer from many of the usual trappings associated with low budget film making, IE some of the cast’s acting is a little ropey in places, the gore effects basically consist of buckets of fake blood being ladled over the actors etc. Then plotwise, there’s the question as to why so many staff members were just hanging around the mall after work instead of going home and the inclusion of the obvious horror clichés of people going to investigate strange noises and not coming back etc. 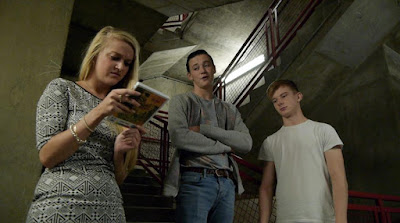 But the film actually looks like it had a damnsite more money than it actually did, it wastes no time in setting up its central premise and the plot is relatively fast paced, driving the story forward all the time, with little in the way of padding. Plus there were some quite funny scenes of black humour, one of which involving a zombie in a wheelchair and another involving the possibility of rapey zombies (yes you read that right) and I was really bowled over at how professionally looking this turned out (and again I’m not just saying that because I’m in it).

The director also pulled off an absolute coup-de-tat  by luring Cannibal Holocaust actress Francesca Ciardi out of retirement to appear in this, in what was her first screen role in over 25 years. The film also benefits from the inclusion of actress Jessie Williams (TVs Dumping Ground and Tracey Beaker) and Jordan Grehs (of Lake Placid 3 infamy) to name but a few. Even more amazingly, he managed to get composer Mike Oldfield to provide an updated version of Tubular Bells for the film's soundtrack. 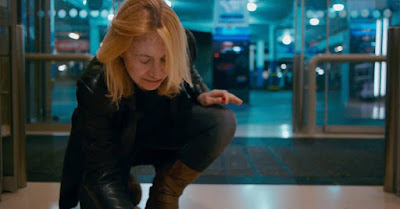 The film was certainly well received by the audience, who were made up of people from the local community, along with most of the cast and crew and I’m sure will go down a storm on the festival circuit. 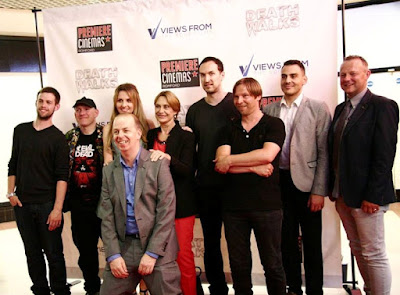 The film is currently being submitted to various film festivals, more info about a future release when it becomes available.

Checkout the behind the scenes videos I filmed...