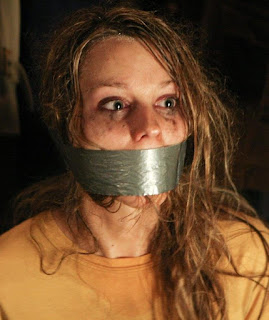 Horror Channel is to screen a season of films focusing on game-playing murderers and predatory psychopaths. So there’s no point hiding behind the sofa as that’s where they’ll be…
The TWISTED KILLER SEASON, which will broadcast on Saturday nights @ 22:50 from 6–27 June, features Michael Powell’s chilling masterpiece PEEPING TOM, the network premiere of the darkly psychological thriller HORSEMEN, the UK TV premiere of THE COLLECTOR and Dunstan’s 2012 sequel THE COLLECTION, in which ‘the masked deviant’ returns to claim more victims.

Sat 6 June @ 22:50 – HORSEMEN (2009) *Network Premiere
Dennis Quaid and Peter Stormare co-star in a dark psychological thriller by ‘Spun’ director Jonas Åckerlund. Aidan Breslin (Dennis Quaid), a troubled detective, investigates a series of murders that seem to be based on the Biblical prophecies concerning the Four Horsemen of the Apocalypse..

Sat 13 June @ 22:50 – THE COLLECTOR (2009) * UK TV Premiere
This bloody, visceral entry in the "serial killer" genre is the directorial debut of screenwriter Marcus Dunstan. After a stint in prison, Arkin (Josh Stewart) finds employment as a handyman. But Arkin decides to rob his boss in order to repay his ex-wife (Daniella Alonso). Venturing to his employer's remote country house to make the heist, he soon finds himself -- as well as the boss' family -- at the mercy of "The Collector."

Sat 20 June @ 22:50 – THE COLLECTION (2012)
The sequel to Marcus Dunstan’s ‘The Collector’, the sick serial killer known as ‘The Collector’ is back and looking for fresh victims. When Elena (Emma Fitzpatrick) sneaks out of her house one night to attend an exclusive party, she can’t imagine the horror that awaits her.

Sat 27 June @ 22:50 – PEEPING TOM
Michael Powell’s unsettling masterpiece stars Carl Boehm as Mark Lewis, an assistant cameraman at a London film studio, who has begun murdering women. He kills them, literally, with his camera and films the attacks and the murders.