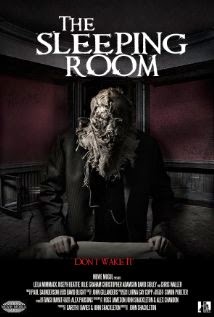 An old Victorian building with a murky past spells trouble for a young call girl in John Shackleton’s directorial debut “The Sleeping Room”, which is out now on VOD and DVD from Second Sight films.
Set in Brighton, Leila Mimmack (TVs “Becoming Human”) stars as a young call girl, named Blue. Her latest client, a young chap named Bill (Joseph Beattie- TVS “Hex”), has just moved into a dilapidated Victorian house, which he’s busy renovating.
Blue finds herself strangely attracted to him and his old house, and so ignores the instructions of her thuggish pimp-boss, and starts seeing him in her free time. But it seems Bill’s old house has a bit of history, to it. Apparently, the building was once a Victorian brothel and a series of brutal killings are rumoured to have once taken place there.
Discovering a secret room behind an old 2-way mirror, they find that the stories of murder and mayhem in the old bordello were in fact true and the killer had made recordings of his crimes using the technology of the day. But it seems that supernatural forces are also at work and relatives of both Blue and Bill are somehow connected to the buildings dark past and the spirit of a serial killer is just itching to finish what he started all those years ago…
Co-starring Chris Adamson (“Razor Blade Smile”, “Judge Dredd”), Julie Graham (TVs “Survivors”) and Chris Waller (“Fright Night Part 2”) the film certainly boasts a well rounded cast of supporting genre actors and was actually co-written by Alex Chandon (director of “Inbred" and "Cradle of Fear"). However, it does get a little confusing in places, with the various sub-plots about how Blue and Bill are connected to the old building. Particularly the weird back story about Blue’s mother, which I didn’t really get.
Overall I enjoyed it, but thought it was a little slow. If you like supernatural thrillers, you’ll probably want to check it out.
The film is out now and available from all good DVD and VOD outlets.