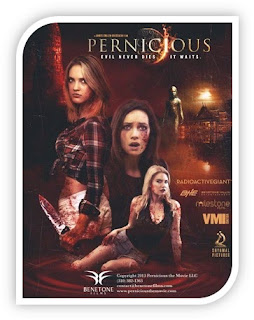 Benetone Films has announced that the acclaimed horror-thriller Pernicious, the new film from James Cullen Bressack ("Hate Crime", "Blood Lake"), will be released June 19 in the UK.
The movie,  written and directed by Bressack and starring Emmy-nominated Emily O’Brien (TVs Young and the Restless), Ciara Hanna (TV's Power Rangers) and Jackie Moore (100 Ghost Street), will be available on VOD (iTunes, Google Play, Play station).
"Pernicious" follows the plight of three American beauties whose dream summer adventure in Thailand quickly turns into a nightmare when they unleash the spirit of a murdered child with only one thing on her mind...revenge.

You can read my review of the film HERE


Producers are Rachvin Narula, Kulthep Narula, and Daemon Hillin, with Rajpal Narula, Deepak Simhal, Ajay Vasu, Farid Khan, and Albert Sandoval as executive producers.
No news as to whether the film will be available on UK disc