"Return to Sender" coming to UK cinemas May 22

Coming to UK cinemas this month, Rosamund Pike (Gone Girl, Jack Reacher) stars as a small town nurse who is brutally attacked and raped in her own home by a mysterious man (Shiloh Fernandez - "Evil Dead [2014]", "Dead Girl" ). 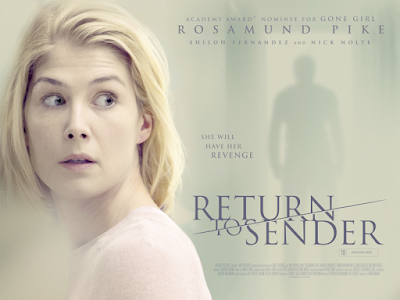 Following his arrest, she starts to write to him whist he's in prison, but the letters all get returned unopened. Determined to confront him she then starts to regularly visit him and seemingly befriends him, against her father's (Nick Nolte - "Hulk", "Cape Fear") express wishes.
Unable to understand his daughters intentions he fears for her safety come the time her assailant is released…but has he underestimated her strength and resolve?
Also starring Rumer Willis ("Sorority Row"), Alexi Wasser ("Cabin Fever 2") and Scout Taylor Compton (Rob Zombie's "Halloween"). "Return to Sender" is released to UK cinemas May 22nd.
View the UK trailer on YouTube