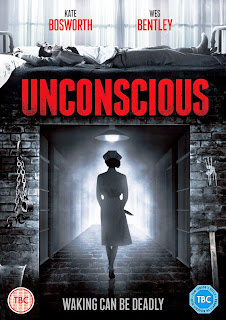 Hollywood stars Kate Bosworth (Still Alice, Superman Returns) and Wes Bentley (The Hunger Games, Interstellar) come together for this surreal thriller, unlike anything you’ve seen before.
When a man (Wes Bentley) wakes up strapped to a bed and with no memory, he is greeted by a mysterious and sinister woman (Kate Bosworth) claiming to be his wife.
Venturing around the derelict household, he finds traces of blood, unexplained, unusual objects and grows increasingly suspicious and afraid of the mysterious woman.
Stumbling across the cold corpse of another man, bound and locked in the basement, he realises how deep and dangerous the web of lies and deceit go, but suddenly, all is black, and when he awakes again he is a prisoner, trapped and unable to move. It is only then that the electric shocks begin and the true nature of his wife is revealed…
Directed by Michael Polish and also starring Richard Riehle (Texas Chainsaw 3D, Transformers: Age Of Extinction) Shashawnee Hall (TV’s Justified, A Nightmare on Elm Street), "Unconscious" is released to UK VOD 20 July, with a DVD release on 27 July.
Pre-order the UK DVD from Amazon.co.uk