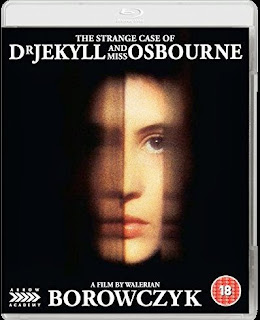 Following unanimous critical acclaim for their 2014 Walerian Borowczyk retrospective collection, Arrow Video is thrilled to announce the world premiere Blu-ray release of Borowczyk’s "The Strange Case of Dr Jekyll and Miss Osbourne", released on dual-format Blu-ray and DVD from 18th May 2015, marking the first time the film has been made available commercially since the VHS and Laserdisc era.
Often regarded as Borowczyk’s last great film, and his only out-and-out horror film, The Strange Case of Dr Jekyll and Miss Osbourne features his most culty cast including Udo Kier, Patrick Magee and Howard Vernon. The disc will be presented with both the French and English versions of the film, the latter featuring Patrick Magee’s own voice.
It’s the engagement party for brilliant young Dr Henry Jekyll (Udo Kier) and his fiancée, the beautiful Fanny Osbourne (Marina Pierro), attended by various pillars of Victorian society, including the astonishing Patrick Magee in one of his final roles. But when people are found raped and murdered outside and ultimately inside the house, it becomes clear that a madman has broken in to disrupt the festivities – but who is he? And why does Dr Jekyll keep sneaking off to his laboratory?
We know the answer, of course, but Walerian Borowczyk’s visually stunning adaptation of Robert Louis Stevenson’s much-filmed tale is crammed with wildly imaginative and outrageously perverse touches characteristic of the man who scandalised audiences with Immoral Tales and The Beast, not least the explicitly sexualised nature of Mr Hyde’s primal urges.

·Brand new 2K restoration, scanned from the original camera negative and supervised by cinematographer Noël Véry
·High Definition Blu-ray (1080p) and Standard Definition DVD presentation of the film, released on both formats for the first time anywhere in the world
·English and French soundtracks in LPCM 1.0
·Optional English SDH and English subtitles
·Introduction by critic and long-term Borowczyk fan Michael Brooke
·Audio commentary featuring archival interviews with Walerian Borowczyk and new interviews with cinematographer Noël Véry, editor Khadicha Bariha, assistant Michael Levy and filmmaker Noël Simsolo, moderated by Daniel Bird
· Interview with Marina Pierro
· Himorogi (2012), a short film by Marina and Alessio Pierro, made in homage to Borowczyk
· Interview with artist and filmmaker Alessio Pierro
·Phantasmagoria of the Interior, a video essay by Adrian Martin and Cristina Alvarez Lopez
·Eyes That Listen, a featurette on Borowczyk’s collaborations with electro-acoustic composer Bernard Parmegiani
·Happy Toy (1979), a short film by Borowczyk based on Charles-Émile Reynaud’s praxinoscope
·Introduction to Happy Toy by production assistant Sarah Mallinson
·Returning to Return: Borowczyk and Early Cinema, a featurette by Daniel Bird
·Reversible sleeve with artwork based on Borowczyk’s own poster design
·Booklet with new writing on the film by Daniel Bird and archive materials.