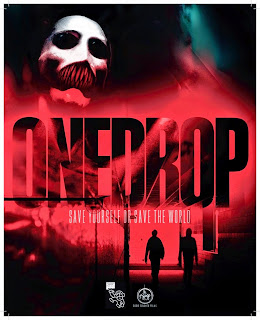 ONE DROP, the terrifying new horror creature feature from director Tricia Lee, began shooting yesterday in Toronto. ONE DROP tells the story of a single mother who wakes up in the basement of a medical facility only to discover that everyone around her is dead and she is somehow nine months pregnant. As she tries to escape, she realises that something not-quite-human is prowling the hallways, and the only means of survival may be growing inside of her…
Lee, one of the very few successful female directors in the genre, first made the audience scream with her psychological thriller feature CLEAN BREAK followed shortly by her creature feature debut SILENT RETREAT. Horror critic Debi Moore says “Not only is Tricia a creative director, she’s also a strong and tenacious entrepreneur. One of the strongest female voices in Canadian horror today” – Debi Moore, Dread Central. Since their Best Canadian Feature win at the Toronto After Dark Film Festival, long-time team Tricia Lee and writer Corey Brown have been working on the script for ONE DROP, their new horror creature feature, and both are bloodthirsty to see their vision become a reality.
IndieGoGo Campaign: http://igg.me/at/one-drop
The ONE DROP team have launched an Indiegogo campaign to start sharing eyepopping exclusive project updates from set with fans while also fundraising to complete post- production for the film. Pledgers to the campaign will get the first chance to have a photo op with the creature as well as lots of other horrifying rewards.
In order to bring her chilling vision to life, Tricia Lee and casting director Kristen Henderson have assembled a fantastic cast, and is thrilled to introduce them: Lara Gilchrist (Battlestar Galactica); Benjamin Arthur (Less Than Kind); Torri Higginson (Stargate: Atlantis); Mark Taylor (Flashpoint); Julian Richings (Shoot 'Em Up, Cube). These talented actors will join forces to battle a nightmare beyond the reaches of science. In One Drop, science is pitted against religion in this suspenseful script that is visually, emotionally and intellectually stimulating.
Right now, the crew is hard at work building sets and SPFX guru Shaun Hunter is creating gruesome prosthetics to make the most frightening film possible. With the support of Producer Chris Luckhardt (Silent Retreat) and Executive Producers Brigitte Kingsley (The Dark Rising Franchise) and Michael Baker (Backcountry, Nostrum), this project was recently selected to attend the Frontieres Genre Co- Production Market in Brussels, Belgium that coincides with the Brussels International Fantastic Film Festival. With an overwhelmingly positive response, the only question remaining is, will audiences be brave enough to watch?