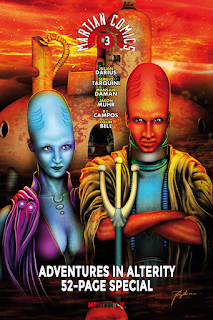 Martian Comics are on Kickstarter, trying to fund a huge 52-page special third issue.
It’s got seven stories in it, illustrated by three different artists. Including the next two chapters of "The Girl from Mars," a Lazarus story, and four other tales demonstrating the scope and breadth of Martian history!
Check out the video and the rewards, which include a 106-page trade paperback of the series so far, on its Kickstarter page.
You can also read more about the series on its official page.