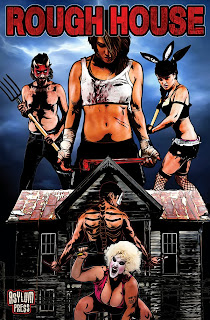 Asylum Press and Pretend For Real Studios have released a trailer for their upcoming film and comic book preview pages for their latest horror franchise entitled "Rough House".

"Rough House" is a gritty, action-packed horror movie and comic book series that examines innocent victims thrown into a caged fighting match with deranged serial killers where they fight to the death. Combining the brutal ruckus of Fight Club, the twisted horror of The Texas Chainsaw Massacre and draping it under a cloak of a government black ops conspiracy.

The story begins with an athletic young woman known only as “The Girl” who is kidnapped and thrown into a bizarre world of masked serial killers who torment their victims in brutal underground fights, backyard wrestling matches and deadly mixed martial arts bouts.  She soon proves herself able to hold her own in death matches against colorful masked killers with names like “Bone Job”, “Baby Fat, and “Skeeter the Devil Boy”. Once inside the Rough House ,“The Girl” uncovers dark secrets that possibly link her to a secret government program and to the fighters themselves. As “The Girl’s” psyche is worn down by brainwashing and psychotropic drugs, she becomes more and more of a stone cold killer herself. She must decide whether she will escape the Rough House or stay focused on her true target, the ringleader called “Big Daddy.”

Rough House is based on a story idea and trailer created by Mike L. Taylor of Pretend For Real Studios and a feature length screenplay written by Elizabeth J. Musgrave (Farmhouse, Darwin’s Pâté).

The project will be released as a digital first 4-issue comic book mini-series through Asylum Press and later in print as a graphic novel.