Crawl gets UK TV Premiere on the Horror Channel 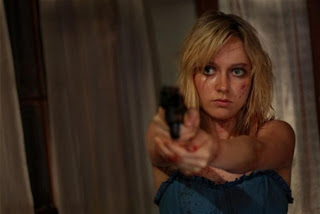 Horror Channel’s UK TV premieres for October is the multi-award winning Aussie cult hit CRAWL, which has screened in twenty countries world-wide and earned director Paul China the Best Director award at Screamfest. It will be broadcast on Saturday Oct 5, 11.00pm.
Claustrophobic heat and brooding tension seep from the screen in this character-driven hi-tone chiller set in an unknown rural town. Seedy bar owner Slim Walding hires a mysterious Croatian hit man to murder a local garage owner over a shady business deal gone bad. The crime is indeed carried out by the stone-faced stranger but a planned double-crossing backfires when an innocent waitress (Georgina Haig) becomes involved.
October also features the Horror Channel network premieres of two very contrasting films.
From Bernard Rose, the director of ‘Candyman’ comes PAPERHOUSE (1988), where fantasy and reality collide when a bed ridden 13 year old discovers whatever she draws in her sketchbook comes to life in her dreams. However, the young girls mind gives rise to powerful manifestations that aren’t always quite the innocent visions she had in mind. PAPERHOUSE broadcasts on Sat Oct 12, 10.55pm.
One studio that stands for independent film-making more than any other is Troma -  boasting 40 years of ‘reel’’ independence. One of their most famous movies is CLASS OF NUKE EM HIGH (1986). Troma have always hinted at political undercurrents in their films – in this case the evils of nuclear power - which conveniently fuels Troma’s Lloyd Kauffman’s obsession with slime and mutant monsters. Expect plenty of bad boys on big bikes. Broadcasts on Friday Oct 25, 11pm.