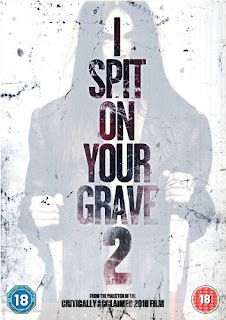 Fresh after its World Premiere at this year’s FILM4 FRIGHTFEST, Anchor Bay UK have announced that I SPIT ON YOUR GRAVE 2 will be released on DVD & Blu-ray 7th October 2013
The highly anticipated horror sequel stars promising British newcomer Jemma Dallender (Community), who takes on the lead role, following in the footsteps of Camille Keaton, star of the 1978 original, and Sarah Butler in I Spit on Your Grave 2010.
Katie (a no-holds-barred performance by Jemma Dallender) has dreams of becoming a model in New York City. Unfortunately, the photos that worked in her small mid-western town aren’t cutting it in the Big Apple. Broke, and in desperate need to update her book, Katie calls a number from a tear-off flyer offering free photos.
But this innocent attempt to update her portfolio quickly turns into an unthinkable kidnapping nightmare where she’s ripped away from everyone and everything she knows. Beaten, battered, bruised, and left for dead, she miraculously survives to unleash a brand of brutal female driven vengeance that has come to define the franchise.
Meir Zarchi’s original became one of the most controversial films of all time and its 2010 remake became a critical and box office success. I SPIT ON YOUR GRAVE 2 is certain to propel the franchise to new levels of fear.
Once again, Steven R. Monroe returns to the director’s chair for the sequel based on a script from SAW IV writer Thomas Fenton and the co-writer of the 2010 film Neil Elman. Co-Stars Joe Absolom (Long Time Dead) and Mary Stockley round out the cast.
Buy the UK DVD at Amazon.co.uk