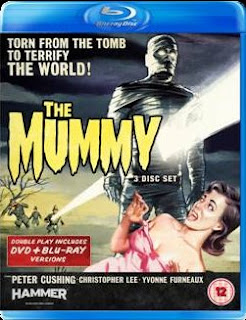 On 14th October Hammer’s classic film THE MUMMY will be released for the first time ever in HD on Blu-ray and on DVD double play and presented in its original UK theatrical aspect ratio of 1.66:1. Fans will also be treated to a host of brand new extras never seen before.
Starring Peter Cushing and Christopher Lee in their iconic roles in this the 3rd of Hammer’s original Gothic classics, THE MUMMY (1959) was directed by the legendary Terence Fisher who previously helmed DRACULA and THE CURSE OF FRANKENSTEIN.
One by one the archaeologists who discover the 4,000-year-old tomb of Princess Ananka are brutally murdered. Kharis (Lee), high priest in Egypt 40 centuries ago, has been brought to life by the power of the ancient gods and his sole purpose is to destroy those responsible for the desecration of the sacred tomb. But Isobel Banning (Furneaux), wife of one of the explorers (Cushing), resembles the beautiful princess, forcing the speechless and tormented monster to defy commands and abduct Isobel to an unknown fate...
Available 14th October in the UK on 3-disc Double Play, the pack comprises 1 x Blu-ray and 2 x DVD. Extras on the discs are as follows...

The Blu-ray incorporates all of the above features on the one disc.]