An Arrow films release to make you "Squirm"!!!! 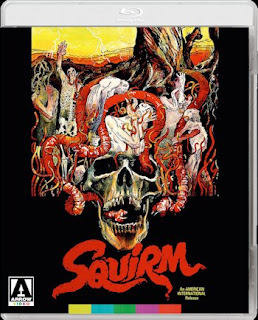 Arrow Video is pleased to announce the UK Blu-ray & DVD debut of Jeff Liebermann’s cult-horror classic SQUIRM on Monday 23rd September  in a special dual edition combo pack.
Lovingly restored for Blu-ray, a process approved by Lieberman himself, Arrow’s HD presentation of SQUIRM is uncut and comes loaded with special features and bonus material, including interchangeable artwork and exclusive writing on the film by UK horror aficionado Kim Newman.
One of the most original and entertaining of the revenge-of-nature films that characterised mid-1970s American horror, SQUIRM begins with a pylon being downed by a thunderstorm, sending millions of volts into the wet, conductive mud, giving its hundreds of thousands of wriggly inhabitants an insatiable hunger for human flesh.
Since the fallen power lines have also cut-off the electricity supply to Fly Creek, Georgia, its population could hardly be more vulnerable as the sun goes down... Houses can be barricaded against most intruders, but what happens when the things you’re trying to keep out are small enough to get into the water supply?
In his debut feature film, writer-director Jeff Lieberman (who also made the cult classics Blue Sunshine and Just Before Dawn) achieves a near-perfect blend of knowing wit and good old-fashioned scares, with Oscar-winning make-up genius Rick Baker (An American Werewolf in London) on hand for some of the most memorably disgusting special effects ever committed to film.
This director-approved Blu-ray & DVD dual-edition release of SQUIRM includes the following special features and bonus material: