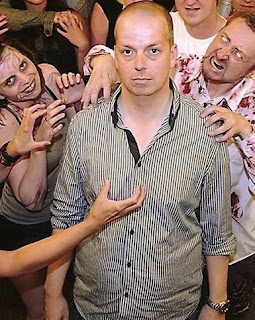 Spencer Hawken's debut feature "Death Walks" has managed to achieve something few movies have ever managed, a  zero budget. Now it's creator is in the final stages of gaining a Guinness World Record for the attempt.

"Death Walks" began shooting on July 15th and consisted of a group of up to four-hundred individuals all giving their time for free, in order to achieve a common goal, and that was the thought that if you want to make a movie you can, mainly by just being incredibly nice to people.

Over 12 different shoots Spencer managed to get cast and crew together at absolutely no cost, to create a truly genuine zero budget movie. So now he plans to try and win the movie a Guinness Record for being the first movie to ever achieve such a feat.

Death Walks has already seen several parts of the Guinness application process, and it's makers very much have their eyes on the prize. If the film qualifies it will be the first time that such an award has been given, and obviously it would be a very hard accolade to beat. Their are a number of low budget movies out their including another zombie movie called Colin made several years ago.

Hopefully if "Death Walks" qualifies for the prize, it should know in early October once the shooting completes around 9am on September the 30th.

From the impressive Mercury Mall as a shooting location, through to Insurance Spencer has persuaded everyone he has spoken to to donate something to the cause.

"Essex and East London is jam packed with raw, cutting edge talent, but nobody seems to appreciate it. Death Walks is going to prove that you don't need lots of cash, and an address book of A-listers in order to pull off a great low budget feature."

Over the journey of "Death Walks" lifespan to date, the movie has received over £250,000 of press coverage, talking about the movie. From radio, press, glossy magazines, websites and a brief article on television Death Walks is getting everyone's attention. And for Spencer and his business partner Lucinda Rhodes this approach has paid dividends. The couple have managed to secure funding to create another two movies in the area, and have plans to put Romford, Brentwood and Essex truly on the map in the movie industry.

"You get little clusters of films in areas, but our goal is to create a new film location to get peoples attention You've had Elstree and Ealing why not Romford, or Brentwood. Essex and East London have everything, from epic industrial locations to beautiful countryside, what better a place to build a brand new jewel in the crown for the movie industry." Said Lucinda Rhodes who is now frantically putting the pieces together for new movie No Reasons which has already cast Daniel Peacock (Robin Hood: Prince Of Thieves) and has a number of British icons in it's sights.

Hawken Rhodes will create two new movies in 2014 focusing on the story of a missing girl for "No Reason's" and a serial killer in "Road Rage". But it does not stop there, the Death Walks journey could create a legacy for others in the area, as should the film find a buyer fund will be created in the Mercury's name that will award sums of cash to low budget movies seeking out a bit of money to source locations or equipment.

In a final statement Spencer said "I honestly believe that by 2016 this little part of the world will have carved a little name for itself in the movie industry, and people like the "Welcome To Essex" crowd (another zombie film being shot nearby) and ourselves will be able to say we played a very big part of it."