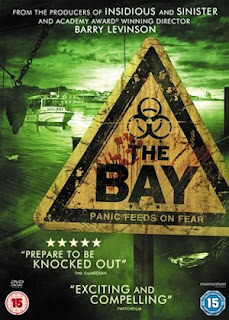 If you missed the advance screenings of Barry Levinson's ecological horror "The Bay" at UK cinemas recently, fear not. The film is released to UK DVD and Blu-Ray on Monday the 18th of March by Momentum Pictures.
The plot takes place in the seaside town of Chesapeake Bay, Maryland. A town that relies heavily on the dockside tourism it brings to the community. When two biological researchers find a staggering level of toxicity in the water they attempt to alert the mayor. But he refuses to raise the alarm in fear of creating a panic among the citizens of the docile town.

As a result, a deadly plague is unleashed, turning the people of Chesapeake Bay into hosts for a mutant breed of parasites. Taking control of their minds, and eventually their bodies, the parasites soon cause the town to descend in absolute terror as they quickly realise the harrowing reality they are faced with.
The film is available to order from Amazon, no word on what extra features will be included on the disc (if any).
Buy the UK DVD at Amazon.co.uk.
Buy the UK BD at Amazon.co.uk.