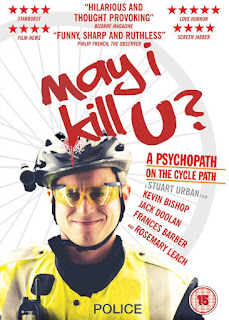 Eureka Video/ Vectis Vision are pleased to announce the release onto DVD of writer/director Stuart Urban’s darkly comic film ‘may I kill u?’. The film perfectly captures the zeitgeist of the time with the salutary tale of Baz, one of Britain’s new breed of police – a cycle cop.  Although, at first, he appears a likeable figure of fun, a freak accident turns him into a psychopathic killer.
Launching a one-man campaign to clean up the streets of London of no-hope criminals, he despatches them whilst filming everything on his helmet-cam and, ever polite, asking them “May I kill you” before doing so. Soon he has become an internet and twitter phenomenon using the alter-ego @N4cethelaw.  When the tables are turned on him in a bizarre twist of fate, Baz’s true identity looks set to be exposed. Can he survive to ride another day……….