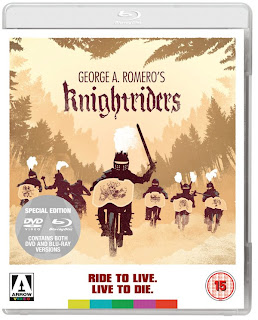 Arrow Video are pleased to announce that George A. Romero’s landmark non-horror offering “Knightriders” will make its UK DVD & Worldwide Blu-ray debuts when released on Monday 22nd April 2013.
Made immediately after the zombie classic “Dawn of the Dead”, “Knightriders” depicts a troupe of travelling medieval entertainers, who ride around on Motorcycles, rather than horses, trying to live their lives according to the ideals of King Arthur – No easy feat in Reagan’s America, where the outside world and its financial realities constantly encroach on their dreams.
With the self-adopted title of “King William”, the group’s leader Billy (played by a young Ed Harris in his first leading role) becomes gradually more unstable, as he blurs the lines between the medieval knight his act portrays, and the realities of everyday life in the 20th century.

With a memorably eccentric cast of characters (including make-up effects genius Tom Savini in a major role, and a cameo from novelist Stephen King) and a complex, nuanced script, “Knightriders” is Romero’s warmest and most personal film to date.
Specially restored by Arrow’s acclaimed team of experts, the deluxe editions of “Knightriders” include both DVD and Blu-ray copies of the film along with a host of special features and collector’s items, listed as follows...

Pre-order the UK BD/DVD combo pack from Amazon.co.uk
Posted by Dark Angel at 22:14