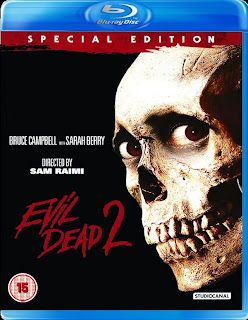 With the new “Evil Dead” remake just around the corner, StudioCanal have re-issued Sam Raimi’s sequel to the original cult classic “Evil Dead 2 : Dead by Dawn” to Blu-Ray in a brand new special edition release.

Now, I’m sure we’re all familiar with the plot, but just to re-cap. The sole survivor of the original Evil Dead, Ash (Bruce Campbell – TVs Burn Notice) goes back to the cabin in the woods and ends up doing battle with more zombies and evil spirits, after they’re awakened by the incantations in some old book.

Exceptionally gory, and hilariously funny, the film boasts plenty of blood and guts, as Ash is forced to fend off the undead with chainsaws and shotguns in a series of slapstick battles.

A hilarious cult classic, that’s even more enjoyable than the first. This new special edition Blu-Ray boasts a whole stack of new features, not seen on any previous UK release. These include…

"Road to Wadesboro", in which propmaster Tony Elwood takes us round several of the filming locations used in the movie, including the old schoolhouse where they built the interior sets, and the woods where they built the old cabin, showing whats left of the old building today.

"Behind the Screams", which is essentially a photo gallery of behind the scenes stills, narrated by crew member Tom Sulivan, (note, this is not the same feature that was on the old US Laserdisc, which was a bunch of effects test footage. Most of this can be found in other features on the disc though).
Lastly you get the "Theatrical trailer" and a feature length "Audio commentary track" that accompanies the main feature, with Sam Raimi, Bruce Campbell, Scott Spiegel, Greg Nicotero, which is the same one from previous releases, originally recorded for the old laserdisc.
The "Evil Dead 2" special edition is released to UK Blu-Ray April 15th from Studio Canal.
Pre-order the BD from Amazon.co.uk