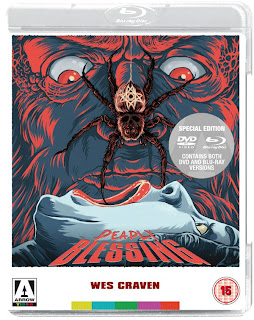 Arrow Video are pleased to announce the deluxe Blu-ray & DVD releases of Wes Craven’s American horror classic, Deadly Blessing, which will be released in the UK on Monday March 25th.
When Martha (Maren Jensen - TV's Battlestar Galactica) marries Tom (Jon Gulla), she leaves her LA lifestyle behind and the pair settle-down on an isolated farm, appropriately named “Our Blessing”.
Tom was previously part of a close-knit sect known as the Hittite, a hard-core working community (even more aggressive than the Amish) who think that all modern machinery is the work of the devil.
Martha feels shunned by the Hittite members and is treated as an outsider by its fanatical members.But when Tom is mysteriously and tragically killed by a tractor, one such machine forbidden by Hittite, things take a much darker turn...
Directed by Wes Craven (Nightmare on Elm Street, Scream), horror veteran Michael Berryman (The Hill Have Eyes, Devil Rejects) co-stars, along with screen legend Ernest Borgnine (Willard, Convoy, Escape from New York) and a very young Sharon Stone (Total Recall, Basic Instinct) in one of her first screen roles.