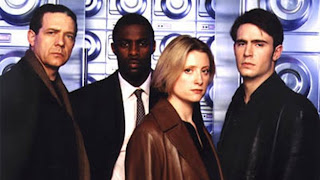 Fans of the cult British vampire show "Ultraviolet" will be pleased to hear that Medium Rare entertainment have picked up the DVD rights to the series and will be issuing it on disc this March.
The series originally aired on Channel 4 to rave reviews in the late 1990s and starred Jack Davenport (Smash) as Detective Sergeant Michael Colefield, who's unwittingly thrust into the nightmarish world of vampires when his best friend Jack (played by a Pre- True Blood Stephen Moyer) disappears on the eve of his wedding to Kirsty (Collette Brown – Doctors, Holby City).
His investigation leads him to uncover a secret Government organisation that hunts vampires, and Jack has become one of the hunted. Michael reluctantly joins the team which includes a soldier Vaughn Rice (Idris Elba – Luther, The Wire) scientist Angela March (Susannah Harker – Waking The Dead) and a Catholic priest Pearse J Harman (Philip Quast – The Devil’s Double, Clubland).
The series will be available on a special 2-disc DVD set from 22 April and contains a retrospective "making-of" documentary as an extra.