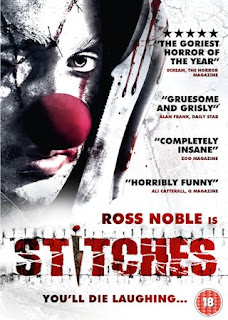 Now i'm sure many of you will remember a rather amusing Irish zombie film from a few years back called "Dead Meat"? Well director Conor McMahon is back with a new comedy horror, "Stitches", starring comedian Ross Noble, and I managed to blag myself a copy to review.
Set in Ireland, Noble plays a foul mouthed children's party entertainer named Stitches the Clown, who has an unfortunate accident with a carving knife whilst trying to keep some unruly young brats entertained at young Tommy's birthday party.

Flashing forward 6 years and Tommy's friends twist his arm into throwing a party at his house whilst his parents are away for the weekend. Inviting many of his class mates over, as the music starts and the alcohol begins to flow, someone decides to gatecrash their party and the young kids that were responsible for that fateful accident 6 years ago discover that jokes are never as funny the second time round...

Also starring Tommy Knight (Doctor Who/Sarah Jane Adventures) and Gemma-Leigh Devereux (Casualty/The Tudors) overall I liked this one, Noble is aptly cast as the foul mouthed Stitches, who kind of reminded me of Captain Spaulding from "House of 1000 Corpses/Devils Rejects" and there was some genuinely funny scenes, though I did find some of the comedy a little hit and miss in places, as I'm not really into "Inbetweeners" style teen-humour.

But the film more than made up for this with Noble's sleazy performace and the spectacular graphic excesses, which include someone getting their eye gouged out with an umbrella, in a scene that would put a Fulci film to shame, and another unfortunate sole having his entrails ripped out and fashioned into balloon animals.
Now the disc I was sent was a review copy, which was devoid of extras. No news on what extras will be included on the retail release (if any).

So to sum up, I'd advise checking this one out, though it's definitely not a film I would recommend to people who suffer from coulrophobia (that's fear of clowns).
The film is released to UK DVD and Blu-Ray March 4th from Kaleidoscope Entertainment.
Buy the DVD at Amazon.co.uk

Buy the BD at Amazon.co.uk