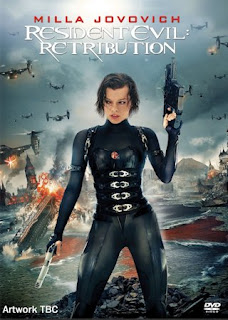 The nice guys at Sony sent me a copy of the new “Resident Evil” film to review, which is out on disc here in the this month, so here we go...
"Retribution", which is the 5th film in the series, starts off pretty much where "Afterlife" left off, in which we see Alice (Milla Jovovich) being captured by the Umbrella Corporation and taken to one of their last remaining headquarters.
Breaking out of her cell, she has to fight her way past numerous Umbrella soldiers, hordes of zombies and various other monsters in the company vaults that have been mutated by the T-virus, as she attempts to make it back up to the surface.
If you’ve seen the previous films, you’ll know what to expect as various bad guys and monsters get repeatedly shot. There's some interesting new zombies as well, you've heard of 'Nazi Zombies'? Well this film has 'COMMUNIST Zombies', which drive jeeps and fire machine guns and rocket launchers, which was kind of interesting.
Sienna Guillory is back as Jill Valentine and I was surprised to see many of the characters from the previous films turning up again, but in different roles. Including Colin Salmon, who was in the first film, as we find that Umbrella have been cloning their staff.
Dr Weskers back (Shawn Roberts reprising the roll from the previous film), though he seems to be fighting against the Umbrella Corporation this time, and the film also introduces another couple of characters from the Resident Evil game series, Ada Wong (Bingbing Li) and Leon Kennedy (Johaan Urb - 2012).
Now, I'm aware that the "Resident Evil" films often polarise opinions, however this one is definitely a marked improvement over the previous 2 entries and is actually quite a good action movie.
The film is available on DVD, Blu-Ray and 3D Blu-Ray. Extras are as follows...
DVD Includes:
2D version of the film, Director and Cast Commentary, Director and Producer Commentary, Drop (Un)Dead: The Creatures of Retribution (making-of feature), Outtakes.
Standard Blu-ray Includes:
2D version of the film, Deleted & Extended Scenes, Six featurette, Project Alice: The Interactive Database and all of the Special Features from the DVD version.
3D Blu-ray Includes:
Disc 1: Blu-ray 3D feature film, Deleted & Extended Scenes and Outtakes in 3D
Disc 2: Six making of featurettes, Project Alice: The Interactive Database, and all of the Special Features from the DVD version.


Buy the UK BD at Amazon.co.uk.

Buy the UK DVD at Amazon.co.uk.