Kaleidoscope to release "The Seasoning House". 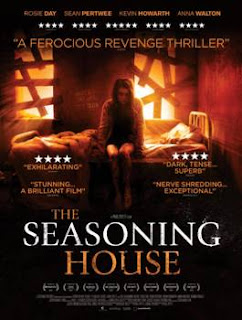 Revenge thriller THE SEASONING HOUSE is the highly anticipated directorial debut from British special effects maestro, PAUL HYETT (The Woman in Black, Eden Lake, The Descent).
Having made its much awaited premiere at the opening of FRIGHTFEST 2012 to critical acclaim THE SEASONING HOUSE is a dark, gripping exploration of a young orphaned girl's psychological terror.  .
Set in the war-torn Balkans, The Seasoning House is a grim and soulless place where young girls are bought and sold for men's pleasure.  Here we meet Angel (ROSIE DAY), a young, mute, orphaned girl enslaved by Viktor (KEVIN HOWARTH).
Unbeknownst to her master, she moves between the walls and crawlspaces of the house silently observing, learning and planning for her escape.  When her closest confident is savagely killed, Angel can no longer contain her rage and sets out through both ingenuity and brutality to seek justice.

The film stars British newcomer ROSIE DAY (Ironclad 2) in the lead role of captive Angel, and with support from SEAN PERTWEE (Dog Soldiers) KEVIN HOWARTH (The Last Horror Movie) and ANNA WALTON (Hellboy 2) and will be released to UK DVD this June.