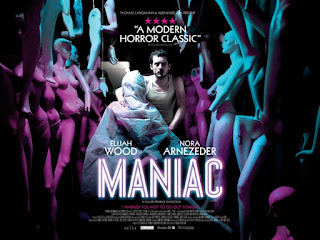 Great news, it has been confirmed by the BBFC that the new film "MANIAC", starring Elijah Wood, has been passed uncut in all it's gory glory with an 18 certificate for its upcoming UK cinema relase this March.
We warned you not to go out tonight. Just when the downtown Los Angeles streets seemed safe, a serial killer with a fetish for scalps is back on the hunt. Frank (Elijah Wood) is the withdrawn owner of a mannequin store, but his life changes when young artist Anna (Nora Arnezeder - Safe House) appears asking for his help with her new photo exhibition. As their friendship develops and Frank’s obsession escalates, it becomes clear she has unleashed a long-repressed compulsion to stalk and kill.
From producers/writers Alexander Aja and Gregory Levasseur (THE HILLS HAVE EYES, MIRRORS, PIRANHA 3D) and director Franck Khalfoun (P2), this remake of the original 1980 shocker is a stylized and technical triumph, with a nerve-shredding Argento tribute score.– the entire movie is shot from the killer’s point-of-view. The film premiered at this Cannes Film Festival Official Midnight Screening selection.

The film is released to UK cinemas March 15.