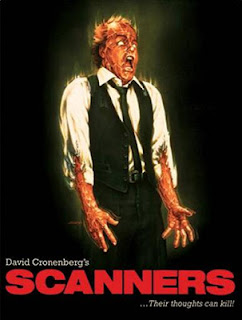 Scanners, one of the most iconic horror films of the eighties from legendary director David Cronenberg (Cosmopolis, A History of Violence, The Fly), comes to UK Blu-ray for the first time in a highly collectable limited edition steelbook thanks to Second Sight Films.
Drifter Cameron Vale (Stephen Lack - Dead Ringers) is plagued by incessant voices in his head, not realising he is a Scanner - a person with extraordinary powers, who can not only read minds, but can literally tear them apart. He soons encounters Dr Paul ruth (Patrick McGoohan - The Prisoner), a scientist trying to help his kind adapt to society. But another underground movement of scanner lead by Derryl Revok (Michael Ironside - Total Recall, Starship Troopers) have other intentions and the ultimate confrontation of minds awaits.
This cult classic horror comes to UK Blu-ray as a limited edition steelbook along with a DVD release on 8 April 2013 complete with a slew of brilliant new special feature including:
-MY ART KEEPS ME SANE – Interview with star Stephen Lack
-THE EYE OF SCANNERS – Interview with cinematographer Mark Irwin
-THE CHAOS OF SCANNERS – Interview with executive producer Pierre David
-EXPLOPING BRAINS & POPPING BRAINS – Interview with makeup effects artist Stephen Dupuis
-BAD GUY DANE – Interview with actor Lawrence Dane
Scanners II: The New Order and Scanners III: The Takeover will also be released for the first time on UK Blu-ray only as single releases on 8 April 2013.
Buy the "Scanners" Steelbook BD at Amazon.co.uk