Lisa and the Devil (House of Exorcism) - UK BD Review 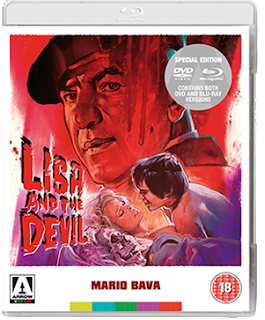 Arrow films were nice enough to send  me a copy of their new release of Mario Bava’s “Lisa and the Devil” to review on Blu-Ray. Sadly, I am one of the few movie lovers that has yet to invest in a Blu-Ray player, which made watching this a little troublesome. But fortunately, a good friend of mine allowed me to pop round whilst he was out and watch it on his set-up (though considering I polished off the last of his chocolate biscuits whilst I was there, I doubt he will allow me to do so again).
But anyway, “Lisa and the Devil” is probably one of Mario Bava’s more infamous films, as it was previously only available in a heavily re-edited version entitled “House of Exorcism”, which had newly shot scenes that totally altered the context of the entire film. This release from Arrow contains both Bava’s original cut of the “Lisa..”, and the re-edited version, which are selectable from the main menu.

The original cut of “Lisa and the Devil” stars Elke Sommer (who “Carry On..” fans may recognise from “Carry On Behind") who gets lost whilst looking round some quaint Italian village.She bumps into Kojak, sorry Telly Savalas, complete with his trademark lollipop, who she asks for directions. But still fails to find her way back. Accepting a lift from a rich couple, who offer to drop her back at the hotel, their car unfortunately breaks down outside Telly Savalas’s mansion, who invites them inside whilst the chauffer attempts repairs.
But it seems there’s something sinister about the family living there, as the people in the group start getting bumped off by them.
This was a very surreal “arty” film, and it was a job to know at times what was going on, or why. I also found the ending rather odd (which I won’t spoil for you) but it did make me wonder what it was I had just been watching.
The alternate cut of the film, “House of Exorcism”, starts off the same, except Elke Sommer manages to find her way back to the town centre this time, but THEN suffers a seizure after meeting Telly Savalas and is taken to hospital, where the local priest finds that her problem is spiritual, not medical, and attempts to perform an exorcism.
The surreal scenes of her getting lost and winding up at Telly Savalas’s mansion in this are shown as being all in her mind whilst she’s undergoing the exorcism. Apparently the reason Bava cut this version of the film together was no one was interested in picking up the original version for distribution, so he tried to cash in on the success of “The Exorcist”.
This is the first time that either version of this film has been available on Blu-Ray here in the and Arrow have spared no expense chocking the disc full of extras. As well as getting 2x versions of the film, you get an accompanying introduction to each version by noted Horror journalist Alan jones.
There’s 2 different audio commentary tracks, one with Bava biographer Tim Lucas, which accompanies the “Lisa…” version of the film and one with Producer Alfredo Leone and star Elke Sommer that accompanies the “House of Exorcism” version.
There’s also a making-of retrospective documentary, featuring interviews with many of the cast and crew members, a rough cut trailer for “Lisa and the Devil”, along with 2 trailers and a TV spot for “House of Exorcism” and a deleted scene, which is actually a more explicit take of the love scene between Gabrielle Tinti and Silva Koscina.
The film is released in a dual format Blu-Ray/DVD combo pack (good news for those like me who do not yet own a BD player) and is definitely a must for Bava fans.


Buy the Lisa and the Devil DVD/BD combo pack at Amazon.co.uk
Posted by Dark Angel at 13:14