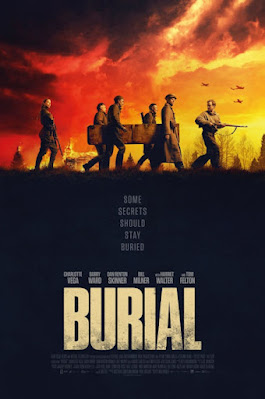 Set for its World Premiere at the esteemed FrightFest 2022 festival this August comes the highly anticipated thriller BURIAL, the new feature from writer/director Ben Parker (The Chamber), which will receive its digital release in September, from 101 Films.

London, Christmas Day. The home of an old woman (Harriet Walter), who watches the news of the collapse of The Soviet Union, is broken into by a violent neo-Nazi (David Alexander), hunting for evidence from WWII. But he gets a little more than he bargained for…

Flashback to May 1945, the last days of World War II, and the tale of the woman’s younger self. In this gripping, thrill-packed feature, we follow a small band of Soviet soldiers, led by intelligence officer Brana Vasilyeva (Charlotte Vega), who must find Hitler’s corpse and deliver it back to Moscow and Stalin, as proof of his death. En route, the unit is attacked by German ‘Wehrwolf’ partisans, who stalk the fighters with the ultimate mission to pick them off one-by-one.

Brana leads her determined surviving comrades in a last stand to ensure their ‘cargo’ doesn’t fall into the hands of those who would see it buried, to hide the truth forever. What ensues is a thrilling high-stakes mission.

This bloody, brutal but poignant thriller is rife with tension and action in a race to stop this important piece of history from being buried forever.

For more info on the FrightFest premiere and to book tickets to this and other films at the festivel, visit... https://www.frightfest.co.uk