Picturehouse Entertainment are pleased to announce the release of Welsh contemporary horror THE FEAST (GWLEDD) exclusively in UK cinemas nationwide from 19 August. 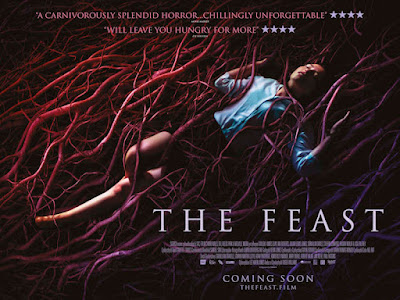 A haunting, slow-burning horror tale exploring the consequences of greed, corruption and man’s exploitation of the earth, THE FEAST (GWLEDD) is the directorial debut of Lee Haven Jones (Doctor Who) and was written and produced by Roger Williams (Bang).  It stars Annes Elwy (Little Women), Nia Roberts (Under Milk Wood), Julian Lewis Jones (Justice League), Steffan Cennydd (Last Summer) and Sion Alun Davies (The Left Behind).

Filmed in the Welsh language, THE FEAST (GWLEDD) unfolds over the course of one evening as a wealthy family gathers for a sumptuous dinner in their ostentatious house in the Welsh mountains. The guests are a local businessman and a neighbouring farmer, and the intent is to secure a business deal to mine in the surrounding countryside.  When a mysterious young woman arrives to be their waitress for the evening, the family’s beliefs and values are challenged as her quiet yet disturbing presence begins to unravel their lives - slowly, deliberately and with the most terrifying consequences.

Steeped in Welsh folklore, THE FEAST (GWLEDD) offers an unsettling lesson in respecting your heritage and remaining connected to your roots.  With its eerie and visceral sound design and bold cinematography both gorgeous and gruesome with splashes of gore, THE FEAST serves up a potent and intoxicating cinematic experience.

THE FEAST (GWLEDD) is a SGRECH production for S4C, Ffilm Cymru Wales, BFI (awarding funds from the National Lottery) & Melville Media in association with Fields Park.