THE REEF : STALKED - Coming to Disc and Digital outlets 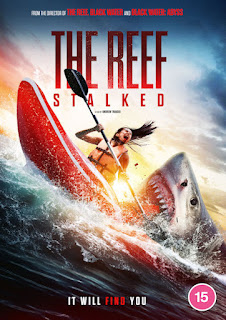 IT WILL FIND YOU! In an effort to escape the trauma of their sister’s murder, Nic (Teressa Liane - The Vampire Diaries) and Annie (Saskia Archer - Boshack) along with two close friends set off for a dream vacation. A Pacific island adventure lies ahead with drinks, sun and surf on the menu.

But within hours of hitting the surf, the women are attacked, far from land, by a great white shark. Bleeding and vulnerable, it’s a race against time as they soon realise they’re being stalked by the beast as they venture closer and closer to safety. They are more than prey to the shark, they’re entertainment.

THE REEF : STALKED is written and directed by Andrew Traucki (Black Water, The Reef).