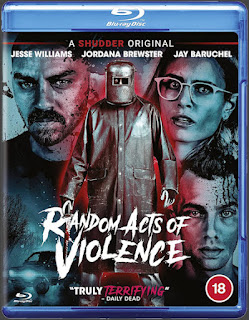 Jay Baruchel writes, directs and stars in his horror debut Random Acts of Violence, which makes its UK Blu-ray debut from Acorn Media International in conjunction with Shudder, following its success on the streaming service.

It soon becomes clear that a crazed fan is using his “SLASHERMAN” comic as inspiration for the killings. As the bodies pile up, and Todd’s friends dropping like flies, he is forced to face the killer and put an end to his notorious comic.

Will Todd be able to stop the spree or will he fall victim to his own creation?

Fan favourite Jesse Williams (Cabin in the Woods) leads in this gore-filled slasher as his own creation is bought to life by a fan hell-bent on committing Random Acts of Violence in increasingly gruesome murders.  The film will be released on Blu-ray, DVD and on digital to download and keep on 23 August 2021.

Special bonus features:
• Interview with Director Jay Baruchel
• More Than Just a Scary Movie
• Inside the Making of an Action Scene