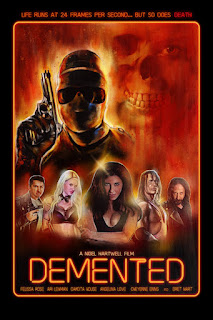 For one female entity time stands still, while for another time travels back and forth between the plains of the supernatural and the earthly horrors of exploitation and murder. Under the guise of true love, Senica leads countless women down a dangerous path of no return. Guided only by the loyalty of Amanda and the sancity of sisterhood. This story attempts to raise awareness as it runs the full spectrum of the human condition and exposes the sometimes dark pathology of today's Social Media.

This retro 1980s style horror film will be available on all major VOD platforms (Amazon, Vudu, I-tunes, Vimeo, Google Play) and also will be available worldwide on Amazon in physical media DVD/VHS/Blu-ray from Friday, August the 13th.

Pre-order the US DVD from Amazon.com