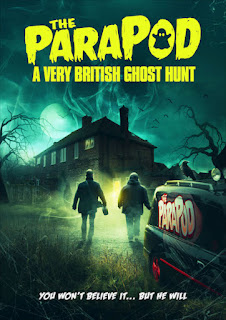 Blue Finch Film Releasing & Infinite Hermit are excited to announce that hilarious new docu-comedy THE PARAPOD - A VERY BRITISH GHOST HUNT will be coming to UK cinemas this September & on VOD 27th September.

After 3.5 million podcast downloads, sold-out live shows and hit specials, get ready to go on the road with hardwired skeptic Ian Boldsworth. Follow as he goes head-to-head with lifelong believer Barry Dodds to discover the truth about the supernatural.

Taking to the roads of the UK in a souped-up hearse, they visit the UK’s most haunted village, the home of the world’s most violent poltergeist, the underground labyrinths of Edinburgh, and everywhere in between. What follows is a rollercoaster of conflict and hilarity, as Barry tries – with increasing desperation – to find the proof to convince his cynical friend that ghosts are real.