Bulldog Film Distribution announces the release of cult film-maker Mickey Reece’s acclaimed festival hit CLIMATE OF THE HUNTER. The film premiered at Dundead horror festival on 10th July and have previews with select cinemas on Friday 13th August, before arriving on digital platforms to rent and download-to-own from Monday 23rd August. 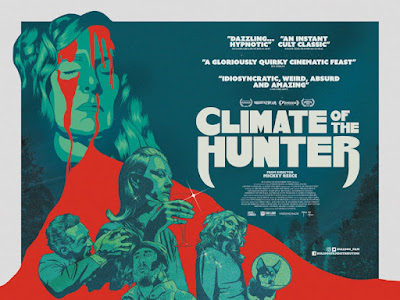 Two sisters, Alma and Elizabeth, along with a dog who’s described as a “philosopher,” have come to Alma’s remote house to reconnect with Wesley after twenty years. Alma is recently divorced, Elizabeth is a workaholic in Washington, D.C., while Wesley lives in Paris dealing with a wife recently struck with a fatal disease.

When the three come together for dinner it has all the makings of a lovely adult melodrama about loneliness, and the desire to connect and share our lives with someone… but we must add to the mix one otherworldly piece of information: Wesley could be a vampire.

A cross between Euro-horror classic Daughters of Darkness and George Romero’s vampire tale Martin, with a rural lo-fi charm all of its own, CLIMATE OF THE HUNTER is directed by the highly prolific Oklahoma-based film-maker Mickey Reece. Dubbed the “Soderbergh of the sticks”, Reece (whose latest film Agnes premiered at the Tribeca Film Festival this month) has been honing his craft making films for over a decade, building up a loyal cult following who love his idiosyncratic flair, literate scripts and defiantly independent approach.

After premiering at last year’s prestigious Fantasia Film Festival, now UK audiences have a chance to enjoy a slice of lovingly made, home-cooked slow burn horror from a talented writer/director genuinely worth getting excited by [a selection of other films by Reece will also be available to stream courtesy of Bulldog Film Distribution .

CLIMATE OF THE HUNTER will be released on Digital HD Monday, 23rd August.