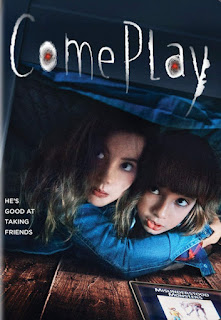 Jacob Chase’s directorial debut feature COME PLAY tells the story of Oliver (Azhy Robertson), a solitary autistic boy, who spends his time immersed on his Smart Phone and tablet. Lonely, and often bullied at school, Oliver really wants a friend. But his isolation only intensifies when his parents separate and he retreats even further into his screens.

When a children’s storybook called “Misunderstood Monsters” mysteriously shows up on his phone, Oliver begins reading it, discovering the story of a lonely creature named Larry. Oliver quickly realizes that the more he reads, the more Larry comes into the real world.

When the creature offers to protect Oliver from the school bullies or any other monsters that might come his way, his mother Sarah realises that Larry is all too real and his pursuit of Oliver’s friendship crosses the line from aggressive to dangerous, his parents must overcome their differences to protect their son.