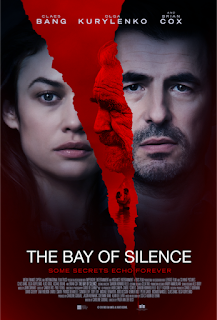 Ahead of the release of the UK release of the dark psychological thriller THE BAY OF SILENCE on Sept 28, Caroline Goodall talks Hollywood influences and the mental health issues that drew her to write and produce her first feature film.

Q) Why did you choose to become an actor?

Performing was my freedom. I had a childhood stutter but it disappeared when I pretended to be someone else, so acting freed me from the stutterer’s crippling shyness. I desperately wanted to be an actress, but I had no clue how to go about it as a career as my family weren’t in the business, though they loved the theatre. So, I thought if I took every opportunity maybe I’d find my way. I joined the National Youth Theatre and then in my last year of school, I was spotted in a school play.

I spent the summer starring in a BBC period drama series called The Moon Stallion. I had to ride side saddle and spent most of the shoot trying to stop my horse from charging the cameraman. Dorothea Brooking, the director (a rare woman at the BBC at the time) encouraged me to take up my place to study English and Drama Bristol University, maybe hoping I would end up doing something else, but I’d had a taste of the life of a professional actor and my mind was made up. Bristol led to The Royal Court, The National Theatre and then the RSC where I co-starred with Brian Cox (in Misalliance) who years later agreed to star in my film The Bay of Silence.

Q) Do you have a career defining moment?

Yes, being picked by the always amazing Steven Spielberg to play opposite Robin Williams in Hook. It was the first Hollywood 100 million dollar movie. I thought they would all be like that. Watching Spielberg work every day was my film masterclass and with Robin, Steven and Dustin I got to endlessly improvise and play with the script. It was a revelation. 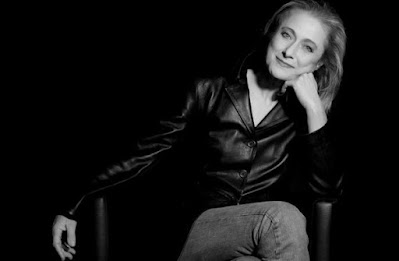 Q) Is it true you’re the only British actress to star in two different Steven Spielberg films?

YES! And I feel truly blessed.

Q) Has writing always been part of your creative life or is it a newly-nurtured talent?

Our house was awash with books. My parents were great storytellers. My father was Liverpool Irish so that came with the territory and my mother’s stories of Sydney life growing up in Australia inspired me. She is still one of the most entertaining people I

know. I was always a book worm. Acting and writing are two sides of the storytelling coin but having faith that anyone would want to listen to my written words took time. Screenplays are deceptively difficult to write and demand intense discipline. But then selling them is even harder….

Q) What drew you to THE BAY OF SILENCE?

The book is beautifully written. I remember reading it in the Bay of Silence itself. Lisa St Aubin De Teran, the British born writer, famous for her colourful life chronicled in books like ‘Slow Train to Milan’ and ‘Keepers of the House’ was writing about places and people I could relate to. The book deals with a lot of things, including the idea that you can marry someone and not really know them.

The character of Rosalind (played brilliantly by Olga Kurylenko) has deep-rooted mental health issues. Madness always scrapes at the edge of creativity. My grandmother who graduated from Oxford in the early 20th century was a bit of a Sylvia Plath - she had breakdowns throughout the war and would disappear for days. My father, the eldest of five kids, would get on a train from Liverpool and search London for her. She was usually found sheltering with the Servite nuns. I know it affected him and he rarely talked about it. She died at 52. I never met her. My grandmother’s brother, my great uncle, Roland Berrill, was allowed to be ‘eccentric’ unlike I suspect my grandmother. He co-founded Mensa, the society for people with a high IQ, was a Fabian, Naturist, ran an art school in Venice, dabbled in the occult and designed a pack of tarot cards that are reputedly cursed. I located a deck once for my father’s birthday and he refused them. It’s the only time I saw him superstitious.

Q) Producing is a very stress-inducing role. What made you decide to do it?

Actors have always hacked away at the rock face to tell stories they want to tell, so to produce is a natural extension of what I already do. No one can get an indie movie made these days without being prepared to lead on it. A good script isn’t enough. I don’t tick boxes – I am a woman of a certain age for a start - so I knew I had to learn the job boots up. It’s a lonely road. I financed it in classic independent film model – script, business plan, sales agents, attaching talent, finding investors, pre-selling 14 territories to prove market appeal. It’s chicken and egg always.

My experience working with Spielberg and Hook producer Kathy Kennedy, inspired me to enrol in evening classes at UCLA and study Film Finance as well as screenwriting. I learned to budget and schedule the old way, fitting scene strips into a folding board thinking if I learned how to produce I might be ready, if ever the time came - but timing is everything and time went by. Marriage, kids, lots of acting work - the classic work/life balance problem.

Then my kids grew and my acting work stopped revolving around their school holidays. In 2014 I was asked to curate a screenwriter’s retreat in the Villa di Ulignano, a magical place renovated by Franco Cristaldi, who was Fellini and Visconti’s Italian producer who married to Claudia Cardinale, now owned by his son, Massimo. That one week lit a fire in me. Jim Hart (who wrote Hook), Olivia Hetreed, Michael Hoffman, Joanna Murray Smith, Andy Paterson - amazing writer/director/producers from around the world, gifted their time and talent. I resolved then and there that I would fulfil their faith. At different times they all pulled for me on this movie, stepping in with support and advice.

Packaging a film project involves constant meetings, film markets and travelling. Step by step I built the team. By the time we got into production, my daughter Gemma had graduated from Goldsmiths College, London University, in Media and English. She started as producer assistant moved to assistant production co-ordinator and on to post production and delivery. My son was an extra. My husband, Nicola Pecorini, who is Terry Gilliam’s cinematographer, gave advice, read different drafts, talked technical logistics and listened to me moaning. My line producer sister checked my early budgets. The list of people to thank is endless. Of course, there are war stories but I am so proud and grateful that we got there! I set the date. June 4. My brother’s birthday. When that happened, things started falling into place. Paula Van der Oest said yes to directing. Then Claes, Brian and Olga’s schedules firmed up, just as some money fell out - but I had momentum and momentum is everything. 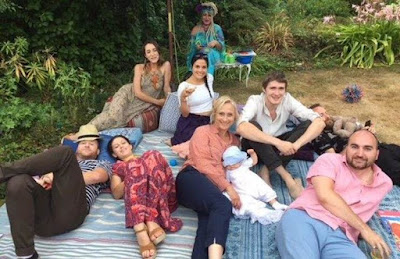 Q) The casting is inspirational, Were the three main leads always your first choices?

Packaging and financing a film is never a straight line. Paula Van Der Oest (our Oscar nominated director) and I knew we needed actors who were both contemporary but with archetypal movie star appeal, to tread that heightened reality of Neo Noir.

I had worked with Brian Cox at the RSC. He was always supportive of the script, and my only choice for Milton. Brian is an actor magnet - everyone wants to work with Brian. Olga is not only smart, talented and a Bond Girl but generous and down to earth. I asked my husband, cinematographer, Nicola Pecorini, who was working with her on Terry Gilliam’s The Man who Killed Don Quixote to slip her the script. Olga responded immediately and said, ‘when do we start’? It still took a year till a green light but she kept the faith and literally wrapped on one movie, got on a plane and flew to us in Italy, to start shooting.

I saw Claes Bang in The Square in Cannes and knew he would be a brilliant Will. I called my casting director, Sharon Howard Field, who discovered he had a UK agent, Simon Sharkey, who ironically, is also a writer and we had worked together! Claes is a theatre animal, like me, and invited me to see him in a play. Peter Garde, my first exec producer (and king of finance plans), is also Danish so I flew to Denmark. Peter picked me up from the airport and directed me on the train to a small regional theatre where Claes Bang star of The Square, Best European Actor 2017 was playing a matinee on a tiny stage - in Danish. Even though he was a huge success at Cannes, he had kept all his theatre commitments. We then had dinner with his wife Lis. Claes fought to make time in his schedule but also introduced me to one of my investors, Dan Friedkin, who also directed him in The Last Vermeer.

When I look back it looks like a straight line of luck and coincidences but at times I felt like I was in a never-ending boxing match with an unknown opponent. I’d go to bed thinking I can’t keep going but I’d wake up the next day with a new idea about how to resolve whatever the problem was and start again.

The Bay of Silence received its world premiere at Shanghai (SIFF) – a big film festival where normally we’d have pitched up to tread the red carpet - but of course, because of Covid, we couldn’t. We have released theatrically in some physical and Virtual cinemas in the USA and Canada and are on Video on Demand in 100 million homes there! We had strong reviews from the industry critics, especially for the actors, director and cinematographer, Guido van Gennep which makes me so happy, and the film is starting its journey into the world. It’s a strange feeling, not being able to celebrate all the hard work with everyone but it’s also a vulnerable moment. My instinct would likely have been to run and hide anyway. I prefer doing the work – promoting it always hooks into the anxiety of my shy stuttering child self.

On the acting front, I can be seen in Cold Courage, currently on Britbox. I play Maggie, an ex-actress hired to use her thespian skills to fight an international crime syndicate.

Since Covid-19 stalled production, I have been doing pick up shoots on two projects which have returned - an Amazon film, Birds of Paradise in Budapest written and directed by Sarah Adina Smith. I play Celine Durand, the troubled US Ambassador to France and mother to Kristen Froseth's aspiring ballerina and a steam punk Sci-Fi indie movie called The Islander, in Croatia, where I play the mysterious ass-kicking Baroness.

And then there’s the second instalment of The Hitman’s Bodyguard, The Hitman’s Wife’s Bodyguard, due in 2021. I’m Crowley, the Head of Interpol, distracted by the antics of Ryan Reynolds, Samuel L. Jackson and Salma Hayek.

Producing wise, I am in post on a documentary with my partner Cheyanne Kane of Vigilants Entertainment. It’s about Hot Rods and Ed Iskendarian or ‘Isky’ - also known as ‘The Camfather’ - who is 99 and still working.

I am trying to find time to finish a historical fiction book I started, which is set in both ancient and modern Italy and like all screenwriters during Covid times, I am writing a one location film (a comedy/drama) as no one’s, least of all my wilder, bigger budget ideas will get much traction till a vaccine is developed.