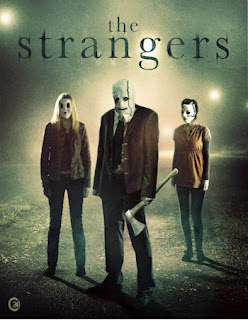 Horrifying home-invasion The Strangers, the 2008 debut film from writer-director Bryan Bertino (Mockingbird, The Monster), stars Liv Tyler (Lord of the Rings, The Leftovers) and Scott Speedman (Underworld, Animal Kingdom) as a couple terrorised by masked attackers. Garnering cult status since its release, The Strangers now arrives as a Limited-Edition Blu-ray box set from Second Sight Films on 28 September 2020.

After a proposal gone wrong at a friend’s wedding, what should have been a romantic getaway for Kristen (Tyler) and James (Speedman) is disturbed by a 4am knock on the door and a terrifying invasion of their home by three strangers in disguise. Named for their nightmarish masks, Man in the Mask (Kip Weeks – Ragged Isle), Dollface (Gemma Ward – The Great Gatsby), and Pin-up Girl (Laura Margolis – Dirty Sexy Money), the twisted trio have brutality in mind and the couple are at their mercy, but who are they and what is their motive?

Kristen and James must fight to survive a night of psychological torment and bloodthirsty violence…who will make it out alive? The hugely anticipated release features a host of brand-new special features, including an extended cut, deleted scenes and new interviews with Liv Tyler and Laura Margolis, director Bryan Bertino and editor Kevin Greutert (Titanic, The Saw Franchise). The set arrives complete with new artwork and poster, and a soft cover book with new essays by Anton Bitel and Mary Beth McAndrews plus stills and behind-the-scenes images.

Pre-order the Box Set from Amazon.co.uk