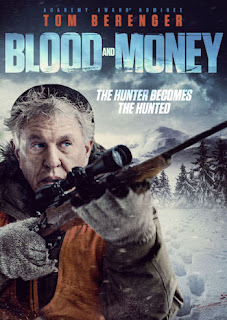 The hunter becomes the hunted in the tense and violent thriller "Blood and Money", as Academy Award-nominee Tom Berenger (Platoon, Sniper) fights for his life in the sub-zero terrain of the North American wilderness.

Retired war veteran Jim Reed (Berenger) heads out on a hunting trip in the Allagash backcountry of Maine but when an accident finds him face-to-face with the corpse of a dead woman and a duffle bag packed with stolen money he soon finds himself in a web of deceit and murder.
Fighting both extreme cold and a gang of bloodthirsty bank robbers, Reed must put all of his military training into action in an ice-cold cat-and-mouse thriller that’s packed with explosive action and shocking twists.