Arrow Video and Arrow Academy deliver a sackful of cineaste stocking fillers this Christmas, with a beautiful collection of three films from a Japanese auteur, an extraordinary action horror that redefined the genre, and the definitive edition of a beloved horror comedy on Blu-ray and UHD, in an astoundingly impressive boxset that will have fans slavering. 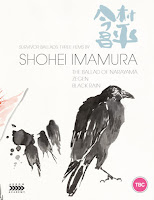 Based on an ancient folktale, The Ballad of Narayama (1983) was the first of two works from the director to win the prestigious Cannes Palme d’Or.

Imamura’s magnum opus depicts the members of an extended farming family eking out their existence in the mountainous north of Japan against the backdrop of the changing seasons before village lore decrees they make the sacrifice of abandoning their aged mother on the top of a nearby mountain when she reaches her seventieth year.

Making its HD debut, Zegen (1987) takes a satirical look at Japan’s prewar colonial expansion through the unscrupulous eyes of its flesh-peddler antihero as he establishes a prostitution enterprise across Southeast Asia.

Finally, the harrowing Black Rain (1989) details the precarious existence of a household of atomic bomb survivors as, five years after being caught in the blast of Hiroshima, they struggle to find a husband for their 25-year-old niece. 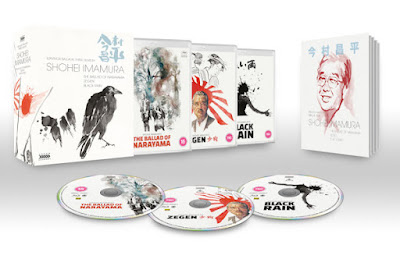 Pre-order the BD Box-Set from Amazon.co.uk


Versus - On Blu-ray, 7th December 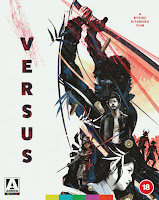 A mysterious face-off in a wooded clearing between two escaped convicts and a carload of sharply dressed yakuza holding a beautiful woman captive ends in hails of bullets and showers of blood. The location for this violent encounter is the mythic Forest of Resurrection, the site of the 444th portal of the 666 hidden gates that link this earthly domain to the netherworld – and it didn’t get this name for nothing.

As one of the surviving prisoners escapes with the girl into the darkness of the forest, disgruntled gangsters soon become the least of their worries as an earlier battle between a lone warrior against hordes of zombie samurai is carried over from a millennium ago into the present day…

DISC 1: VERSUS
• Original lossless Japanese 5.1 and 2.0 stereo audio and English 2.0 stereo audio
• Optional English subtitles
• Audio commentary by Kitamura and producer Keishiro Shin
• Audio commentary by Kitamura and the cast and crew
• New visual essay on the career of Kitamura by Japanese cinema expert Jasper Sharp
• Behind Versus, a two-part behind-the-scenes documentaries exploring the film’s production
• First Contact: Versus Evolution, a featurette exploring the film’s origins
• Tak Sakaguchi’s One-Man Journey, an archival featurette on the actor’s visit to the 2001 Japan Film Festival in Hamburg
• Film festival screening footage
• Team Versus, a brief look inside the Napalm Films office
• Deep in the Woods, an archival featurette featuring interviews with Kitamura, cast and crew
• The Encounter, an archival interview with editor Shûichi Kakesu
• Deleted scenes with audio commentary by Kitamura, cast and crew
• Nervous and Nervous 2, two “side story” mini-movies featuring characters from the main feature
• Featurette on the making of Nervous 2
• Versus FF Version, a condensed, 20-minute recut of the film
• Multiple trailers
• Image gallery

FIRST PRESSING ONLY: Illustrated collector’s booklet featuring new writing on the film and a reprinted interview with Kitamura by Tom Mes, and notes on the making of the film by Kitamura. 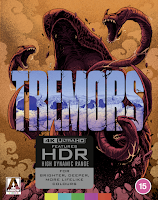 However, things start to get really weird: half-eaten corpses litter the road out of town; the phone lines stop working; and a plucky young scientist shows evidence of unusually strong seismic activity in the area.

Something is coming for the citizens of Perfection… and it’s under the goddamn ground! 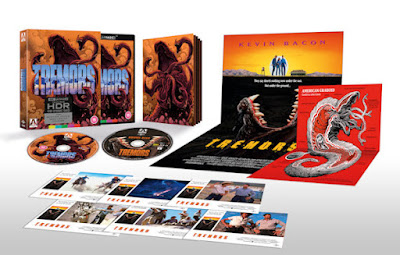