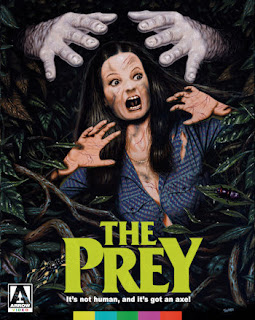 A group of teenagers decide to go backpacking through the woods of Northern California, only to come up against something big, mean and brandishing an axe (played with unholy relish by noted character actor Carel Struycken – Adams Family, Twin Peaks, Geralds Game).

One by one, the kids in the group are picked off in loving detail, by something hideously disfigured, with super-human strength. As the monsterous killer goes around axeing, strangling and even crushing his victims to death. As the hapless kids are left fighting for their lives, whilst stranded in the middle of nowhere.

Filmed back in 1980, after Halloween, but prior to Friday the 13th, the film was not actually released until 1984 . But even then, the version that most people got to see, was a re-edited version which, cut some scenes, whilst inserting a newly filmed back story for the origins of the killer.

The film has sadly languished in obscurity since the days of VHS. The good news though is that Arrow Video have got hold of the original elements and have put together what is probably the ultimate release of the film, which is brimming with extras and containing 3 different versions of the film.

DISC TWO - INTERNATIONAL & COMPOSITE CUTS
Brand new 2K restoration of the International Cut featuring the infamous “gyspy flashback” footage, added at a later date by the producers without the approval of the original filmmakers
Composite Cut combining footage from both the US Theatrical and International Cuts, for the ultimate Prey fan experience!
Extended Outtakes reel - 45 mins of never-before-seen outtakes

The discs come packaged with an exclusive slipcase cover featuring the original UK home video artwork and the case contains a reversible sleeve, with brand new artwork by Justin Osbourn

Clearly influenced by Halloween and in particular, The Hills Have Eyes, The Prey is something of an obscure gem, which not everyone might have heard of. Maybe the plot is a little slow in places, with the director padding the run time with images of wild life footage, but otherwise contains everything you would expect from a good 80s slasher.

There's also a great selection of extras here, I particularly enjoyed the film locagion segment where actress Debbie Thureson re-visits some of the places where the film was shot.

This release is limited to 3000 units, so if you want to pick this up, be quick.

THE PREY is out now on UK BD from Arrow Video.