Fans mourning the loss of Ash vs. Evil Dead will be happy to learn that Fright-Rags has created new merchandise from the show, including trading cards, as well as apparel from The Texas Chainsaw Massacre, Pet Sematary, and The Warriors. 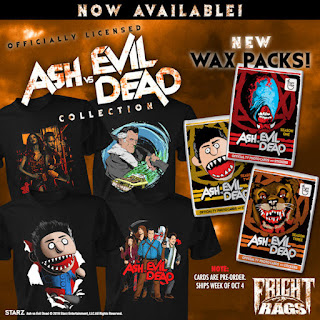 Fright-Rags has created Ash vs. Evil Dead wax packs. Available from each of the show's three seasons, every trading card pack contains a variety of photo cards plus a sticker. Four new Ash vs. Evil Dead shirts are also available, featuring Ashy Slashy, faithful sidekicks Pablo and Kelly, and Ash himself. 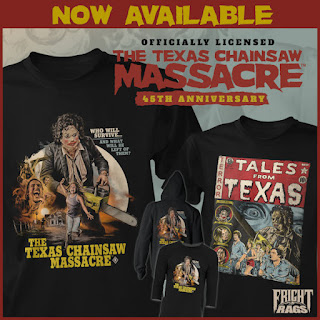 Celebrate 45 years of The Texas Chainsaw Massacre with two new shirts from Fright-Rags. One features the chainsaw-wielding Leatherface chasing after Sally, while the other is inspired by Tales from the Crypt. 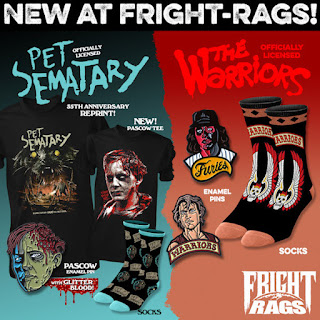 Come out to play with new The Warriors merchandise from Fright-Rags. Choose your side with Warriors and Furies enamel pins, along with a pair of The Warriors socks.

Ash vs. Evil Dead, The Texas Chainsaw Massacre, Pet Sematary, and The Warriors collections are on sale now at Fright-Rags.com.
Posted by Dark Angel at 21:10